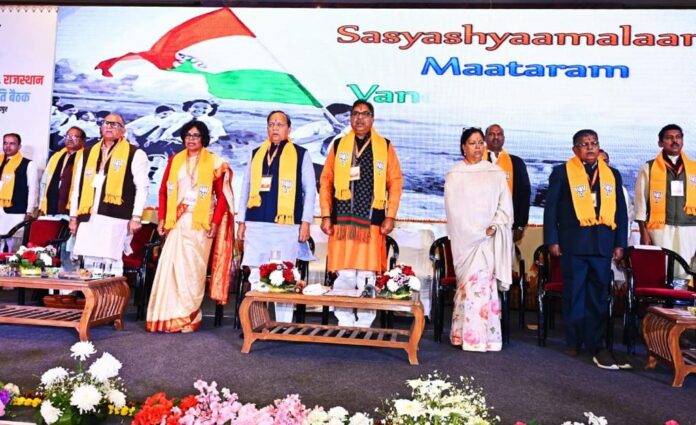 Jaipur| A resolution was passed on Monday in the two-day BJP State Core Committee meeting, which began on Sunday, to oust the Ashok Gehlot government from Rajasthan. Addressing the press conference, Union Minister of State for Agriculture Kailash Chaudhary said that there is Jungle Raj in the state. He said, “Law and order have completely failed in Rajasthan. While the central government is working hard to make India a developed nation, the Gehlot government is working to push Rajasthan on the backtrack. The youth are upset due to repeated paper leaks.

Chowdhary said that it has been decided in the State Working Committee meeting that issues related to the public will be raised and the BJP will take to the streets to protest against the Congress. MLA Vasudev Devnani said the state is being ruled by a helpless Chief Minister. The administration is stalled, and the posts of more than 1 lakh teachers are vacant. The government is working on the policy of appeasement. The issues of conversion are coming to the fore. No action was taken against the particular community due to which there is anger among the public.

He called upon the state government to issue a white paper on the implementation of the promises made so that facts come to the fore. He further said that till the double-engine government is not formed in Rajasthan, he will not sit silent. In such a situation, elections can be held in Rajasthan even before November.

In the meeting, the working committee raised the demand for CBI inquiry instead of SOG in the paper leak case. It was also decided that issues like appeasement policy, atrocities on Hindu community, false promise of unemployment allowance to youth, rising crime against women, poor law and order situation will be raised so that the public is made aware of the poor working style of the state government. Could

Former Chief Minister Vasundhara Raje, BJP state president Satish Poonia, state in-charge Arun Singh and other stalwarts participated in the core committee meeting. Earlier on Sunday, in the meeting of state office bearers, a strategy was chalked out to encircle the government during the assembly session which began on Monday.

At the same time, the leaders brainstormed on the strategy to end factionalism and strengthen the party. In the meeting of the office bearers, a discussion was held on activating the booth level workers of the party. On the lines of the Jan Aakrosh campaign, it has now been decided to hold a dharna and meeting from February 15 to March 15 to gherao the Congress at the district level.

New Delhi | Ahead of Republic Day, the Delhi Police on Monday banned the flight of sub-conventional aerial vehicles over the national capital due to security...
Read more