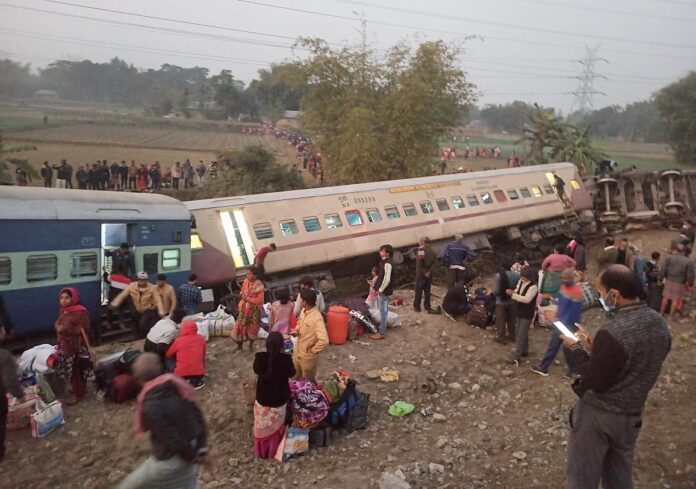 New Delhi| Nine people were killed and around 45 injured in an accident in the Patna to Guwahati Bikaner Express in West Bengal’s Jalpaiguri district on Thursday.

12 bogies of the Bikaner-Guwahati Express derailed near Domohani on Thursday. Union Railway Minister Ashwini Vaishnav will reach the spot on Friday morning. According to the railways, 9 passengers have died in the accident, out of which three are yet to be identified while 2 women and 4 deceased men have been identified. According to the information, 10 passengers are seriously injured, out of which 24 people have been sent to Jalpaiguri District Hospital and 16 people to Moynaguri Government Hospital.

Disturbing pictures have emerged of passengers trapped in the rubble after the train accident. According to railway sources, many passengers are still feared trapped inside the derailed coaches and gas cutters are being used to cut the damaged coaches.

Railways have announced a compensation of Rs 5 lakh for the next of kin of the deceased while Rs 1 lakh has been announced for the seriously injured.

At the same time, the Indian Railways also issued a statement on this accident and said that the accident happened at around five in the evening. Around 12 coaches of the train were affected in the incident. DRM and ADRM have rushed to the spot along with accident-relief train and medical van.

According to the railways, train number 15633 Bikaner Express had left from Bikaner in Rajasthan on Tuesday night. The train left Patna railway station at 5.44 am on Thursday and reached Kishanganj at 2 pm and left for Guwahati from there. During this, the accident happened at around five in the evening.

At the same time, according to a passenger on this train, “Many bogies derailed with a jolt. Many people have been injured.”

10 Tips for an awesome lifestyle