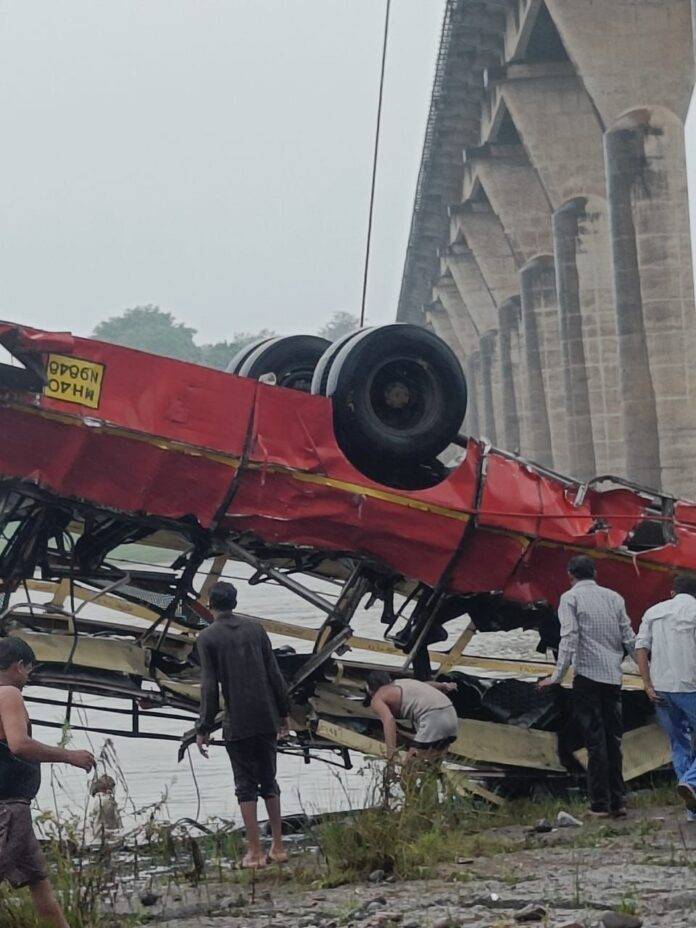 Bhopal/Dhar | A Maharashtra transport bus rammed into the Narmada river at Khalghat in Madhya Pradesh’s Dhar district, the bodies of 13 passengers who were victims of the accident have been recovered. Relief and rescue operations are on. Expressing grief over this accident, Chief Minister Shivraj Singh Chouhan has ordered an inquiry. According to the information received, the passenger bus was going from Indore to Pune, during which the bus fell uncontrollably in the Narmada river in Khalghat area between Khargone-Dhar. 13 passengers died in this accident. Their bodies have also been recovered. There are many missing. Relief and rescue work is going on for this.

It has been told that the bus going to Pune, while overtaking a vehicle, fell into the river breaking the railing of the Narmada river bridge at Khalghat. So far 13 bodies have been recovered, while some passengers are suspected to be missing, so a search is on for them. So far five passengers have been identified.

Indore’s Divisional Commissioner Pawan Sharma has told that when the bus left from Sarwate bus stand in Indore, 12 passengers were in it. A driver thus had 13 passengers in total, after that the passengers must have boarded and disembarked on the way. So far 13 bodies have been recovered in relief and rescue operations. The victims of the accident are being identified.

Expressing grief over this accident, Chief Minister Chouhan said that the district administration team is present at the accident site. The bus has been removed. I am in constant touch with Khargone, Dhar district administration. Instructions have been given to make arrangements for proper treatment of the injured. In this hour of grief, the victim’s family should not consider themselves alone, I and the entire state are together.

Expressing grief over this accident, Congress state president Kamal Nath said, “Sad information has been received about the fall of a bus full of passengers in the Narmada river in Khalghat of Dhar district. I demand from the government and administration that rescue work on war footing should be done to provide relief to the people. I pray to God to keep everyone safe.

Earthquake tremors felt in Rajkot of Gujarat and Karimganj of Assam