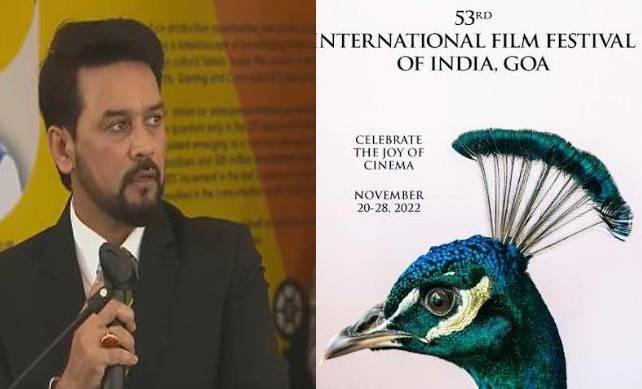 Paris| Information and Broadcasting and Sports and Youth Affairs Minister Anurag Thakur announced several initiatives to promote India as an international film shooting destination. The Minister has been emphasizing making India a leading global content hub. He introduced an incentive scheme for audio-visual co-production and shooting of foreign films in India, with a 30 percent cash incentive limited to $260,000.

In his speech at the inauguration of the star-studded Marche du Cannes Indian Pavilion in the French Riviera on Wednesday, the minister announced that film units employing 15 percent or more of the manpower from India would get an additional 5 percent or a maximum of 50 lakhs. Up to Rs.65,000 will be given.

The minister said along the lines of famous Shashi Kapoor’s dialogue in the blockbuster film ‘Deewar’, “We don’t just have the film industry, we have the cine-maa!”

This year, India wants to give a global audience a taste of India’s cinematic excellence, technological prowess, rich culture and illustrious heritage of storytelling, he added.

The inaugural session began with a presentation by Rajasthani folk artist Mame Khan. This was followed by the release of the first-look poster of the 53rd International Film Festival of India (IFFI) with the tagline ‘Celebrate the Joy of India’. The festival will be held in Goa from November 20 to 28, 2022.

The Minister said, “Indian filmmakers are innovating in the art of storytelling through the use of technology while preserving our age-old stories. The Indian film industry, which produces around 2,000 films every year, is the world’s largest. There’s a lot of cinematography.”

The minister made another big announcement in the program. “We have undertaken the world’s largest film restoration project under the National Film Heritage Mission. Under this campaign, 2,200 films in different languages ​​will be restored to their former glory,” he said.

Mumbai: Shah Rukh Khan, known as the King Khan of Bollywood, has always been known for his eloquence, but the way he uses his tact...
Read more