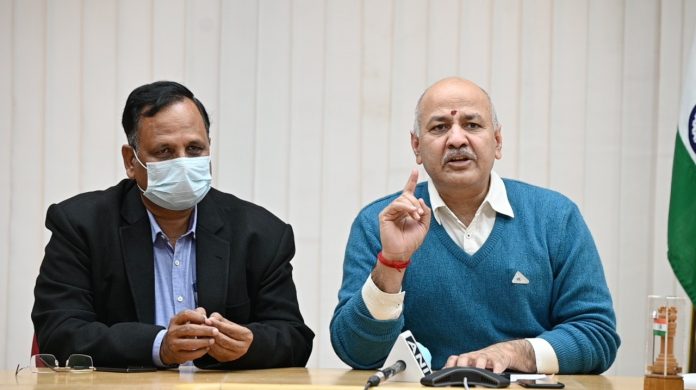 New Delhi: Delhi Deputy Chief Minister Manish Sisodia today announced Rs 938 crore to the Municipal Corporation (MCD) of Delhi for paying the salary of its employees. He appealed to the employees to keep an eye on these funds, so that the money sent by the Kejriwal government does not get embezzled by the BJP. “After seeing the suffering of the MCD employees, on the orders of the Hon’ble Chief Minister, the Delhi Government has arranged these 938 crore rupees from other departments and schemes,” he said.
Sisodia announced this at a press conference today. He said, “The BJP came to power 14 years ago, and has completely bankrupted the 3 municipal bodies. Now, only 12 crores are left in the bank accounts of North MCD while East MCD only has 99 lakhs in its account.”
Sisodia said that the MCD owes the Delhi Government a sum of Rs 6,276 crore. The BJP bankrupted the MCD to such an extent that they don’t even have the money to pay their own employees. Not just cleanliness, the MCD is no longer suitable for even building work. “From sanitary workers, teachers to medical staff among others, none of them have been paid their salaries,” he added.
Sisodia said that such a corrupt municipal corporation cannot be found anywhere in the world. “The BJP leaders themselves believe that there is a lot of corruption going in the MCD. This is the reason that all other municipal bodies of the country are given financial assistance by the Central Government, while the Municipal Corporation of Delhi does not get any amount by the Central Government. After all, what is the reason that Congress, Samajwadi Party, Left or other parties-led municipal bodies get support from the Centre, but the BJP-ruled Municipal Corporation of Delhi does not get any money from the Centre?”,” he questioned.
Sisodia said that the MCD should get Rs 11,500 crore from the Centre. “But the Centre believes that it cannot be given to them because they also think the BJP leaders will themselves pocket all the money. Though financial assistance is written in the law, because of rampant corruption, even the Central Govt. is not giving the money to the Municipal Corporation of Delhi,” he said.
Sisodia said that CM Arvind Kejriwal had written a letter to the Central Government several times and requested them to give the money to the Municipal Corporation of Delhi. He added that even the BJP government at the Centre does not trust the Municipal Corporation of Delhi.
Dy CM Sisodia pointed out that Manoj Tiwari in 2017 civic body elections had said that he would bring in the money to the MCD directly from the Central Govt. They (BJP) were reminded of that promise but Tiwari says that it was all “said in the election”. Though it is written in the law, we know that the BJP leaders of the Municipal Corporation are completely corrupt as they will “eat and steal whatever money they get.” He added, “We can see how the Central Govt. is giving money to the opposition’s municipal corporations, while the BJP-ruled Delhi Municipal Body is not provided with any assistance”
The Deputy Chief Minister said that even in the last municipal elections, the BJP itself admitted that its councillors were laundering the money, so they had changed all their candidates. “This time again they are saying that they will change everyone again because all of them are trying to steal. The BJP’s top leadership and the central government also believe that these people eat all the money, so they cannot be helped,” he said.
Sisodia said that it is a matter of concern for the Delhi Govt. to see the employees who are also the people of Delhi not get their salaries. “The Chief Minister Shri Arvind Kejriwal said that it is not the fault of the employees – if they’ve worked, they should be getting their salaries. Therefore, the Honourable Chief Minister took this decision to help the employees and ordered for funds to be arranged from wherever possible. Even the Delhi government is short of funds. Our revenue used to be 50%. But only half of that tax money is coming in. We’ve also had to stop many schemes to budget. However, 938 crore is being given for the salary of the employees, despite the Delhi Government having no such liability,” he said.
“The market is in a bad shape due to Covid-19 and the lockdown. Despite its own financial constraints, the Delhi Government is also carrying out its work with great difficulty. However, in order to ensure the employees of MCD are paid their salaries, we have somehow managed to arrange Rs 938 crore by stopping other schemes and by cutting the funds of other departments,” Sisodia said.
Sisodia said that this money is being given for salaries to be paid off. “Now I would like to tell the BJP people to not steal this money also. Just pay the salaries to your employers,” he said. He also added that MCD is in crisis only for another year.
“Next year, the Aam Aadmi Party government will also come into the Municipal Corporation. Just as the budget of Delhi Government increased from 30000 crores to 60000 crores, similarly the budget of MCD will also increase and so will the resources. If you work honestly, this day will not have to be seen again.”
At the press conference, Health Minister Satyendar Jain was also present and said that the Honourable Chief Minister had ordered to arrange money in the light of grievances of the employees and for their salaries. “Corruption in MCD is quite high. The municipal corporation currently functions like a business for earning personal money. Because of this rampant corruption, they’ve gone bankrupt,” Jain said.