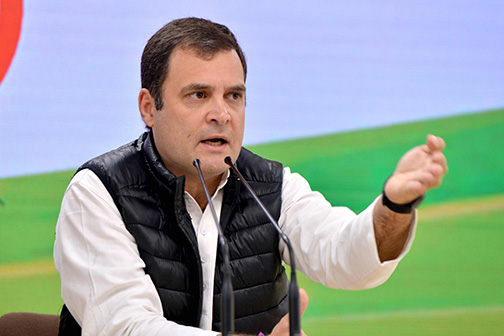 NEW DELHI| Congress leader Rahul Gandhi said after a report came out on Monday that Facebook was occupied by the Bharatiya Janata Party (BJP) and the Rashtriya Swayamsevak Sangh (RSS). Facebook therefore does not act on hate content. The former Congress president posted a video on Twitter and said, “It has been proved once again that Facebook in India is under the control of the Bharatiya Janata Party and the Rashtriya Swayamsevak Sangh.”

The former Congress president made this comment, citing a news story published in the American newspaper Wall Street Journal about Facebook.

The Congress leader posted a video of TV news, citing news published in the US newspaper Wall Street Journal, saying that Facebook has kept its business running uninterrupted, keeping in mind the safety of its offices and employees. The inflammatory video of the party workers did not take action.

The report also claimed that Facebook feared deteriorating relations with the ruling BJP when it took action, so it never took any action against the Bajrang Dal’s inflammatory video.

The newspaper wrote that if Facebook had taken action against Bajrang Dal workers, the company would have had difficulty in doing its work, as well as its employees and offices could have been threatened.

This is not the first time that Facebook is in dispute. Earlier, in August this year, the Wall Street Journal reported that the policies on the social media platform were allegedly biased and in favor of the ruling BJP due to business interests.

The report said that Facebook’s public policy head in India, Ankhi Das, had lobbied in favor of the ruling party and one of its leaders, despite posting abusive remarks on the platform.

Facebook, however, denied the allegations. In October this year, Ankhi Das left the company.

At that time, Congress had said that changing only one person would not solve the issue.

Congress general secretary (organization) K.K. C. Venugopal had earlier suggested that Facebook should demonstrate its neutrality through a thorough reform of its institutional processes and standard operating procedures (SOPs).

“The steps are taken to prevent false, religious polarization and hate-spreading news/content from spreading on their platforms should also be underlined, endangering India’s social harmony,” he said.

The Wall Street Journal on August 14 had given important information on the alleged partisan cases of the Facebook India team led by Ankhi Das and the Congress had taken up the issue.

It had reported that Ankhi Das favored the ruling party and its leaders and that fake and hateful news was being spread through propaganda.

Subsequently, Congress wrote two letters to Facebook Inc. CEO Mark Zuckerberg, urging him to look into the matter seriously. Facebook had responded to the letters, promising its neutrality and appropriate action.

Preparations for the fourth phase of elections in West Bengal

Kolkata| Voting is to be held on Saturday (April 10) in 44 seats of the fourth phase of the West Bengal assembly elections. Keeping in mind...
Read more
National

Has Election Commission changed its decision against Sarma: Congress