Kisan agitation continues on the 20th day, today’s meeting will decide the strategy ahead 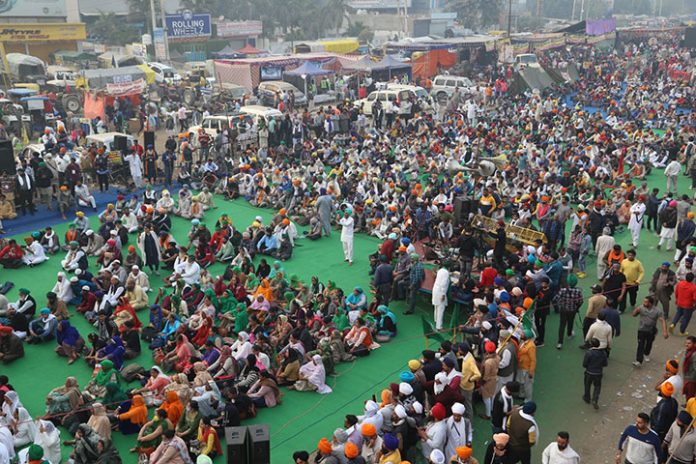 NEW DELHI| The peasant movement continues on Tuesday, the 20th day. Farmers are camping on the borders of Delhi, the country’s capital, demanding the withdrawal of three agricultural laws implemented by the central government. Leaders of farmers’ organizations involved in the United Kisan Morcha will decide the agenda and strategy ahead of the agitation in a meeting to be held at 12 pm today (Tuesday) at the Singhu border. This information is from the Indian Farmers Union, A leader of Punjab gave. Harinder Singh, Punjab’s farmer leader and general secretary of the Bharatiya Kisan Union (BKU), told IANS that there will be a meeting of farmers’ leaders at the Singhu border on Tuesday at 12 pm to decide the future strategy. However, on the question asked about the possibility of talks with the government, he said that till now the demand of all the organizations is that if the government considers the withdrawal of the three new laws, then talks will take place. He said that the government had retained the proposal given earlier by the government, while the farmers’ organizations had rejected it, so there is no question of talks on it.

He said that if there is any new proposal from the government, the leaders of all the farmer organizations involved in the movement can consider it.

The three new laws implemented by the central government are demanding that the leaders of farmer organizations be repealed, among them, the Farmers Produce Trade and Commerce (Promotion and Facilitation) Act 2020, the Farmers (Empowerment and Protection) Price Assurance and Agricultural Services Agreement Act 2020 and necessary The Object (Amendment) Act 2020 is included.

However, the list of demands of farmers is long. Leaders of farmer organizations are also demanding a new law to guarantee the purchase of all notified crops on the minimum support price (MSP), while the government has given written assurances to continue the current system of procurement of crops on the MSP Has said

In addition to this, his demands include abolition of stringent penalties and fine provisions in the ordinance relating to stubble burning and the withdrawal of the Electricity (Amendment) Bill.