Home National The farmers celebrated the celebrations on the border, saying, the election result...
National 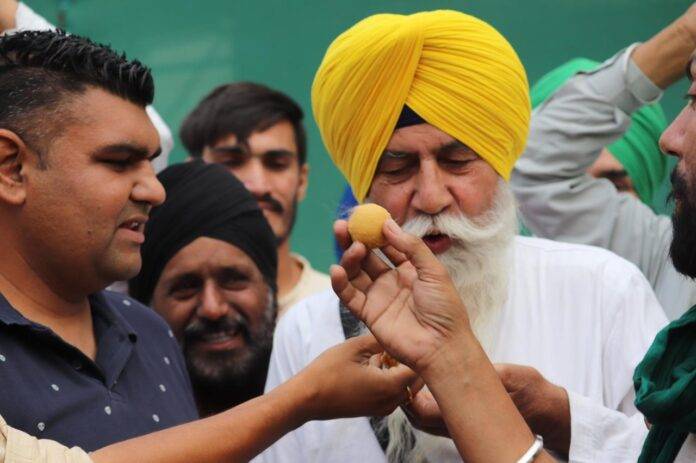 New Delhi| After the TMC’s spectacular performance in the West Bengal assembly elections, the Chief Minister of the state, Mamata Banerjee, has retained her dominance by defeating the BJP. On the other hand, after the BJP lost the elections, the farmers sitting on the borders of Delhi celebrated Sweets Baat.

On the BJP’s defeat in the election, the United Kisan Morcha issued a statement saying, “We welcome the mandate against the BJP in the state assembly elections, which led to the results today. In West Bengal, Tamil Nadu and Kerala, it is clear that The public has rejected the divisive communal politics of the BJP. ”

“In a time of serious crisis when the country is facing disaster in terms of its healthcare-related infrastructure, many innocent citizens are falling victim to this government due to lack of many schemes.”

“At a time when people are facing a major livelihood crisis. BJP tried to spread its communal polarization agenda.”

The statement issued by the leaders of the farmer’s associations stated that “The BJP wanted to win the election by institutional attacks and collusion with the Election Commission. Despite the unethical and illegal aid from the Election Commission and spending huge resources in the election campaigns, the BJP in these states The defeat shows that the citizens have rejected this agenda of the BJP and its allies. ”

SKM said that “The protesting peasants have already clarified that the communal polarization agenda of BJP is unacceptable, it is a common struggle of the citizens to protect their livelihood as well as the secular fabric of the country.” is also.”

The peasants also thanked the citizens of Bengal and other states and appealed to the peasants from all over India, saying, “They should strengthen their resistance, and join the movement in greater numbers. This movement can bring those democratic values We will continue to disseminate those who protect our constitution and fulfill the objectives. Farmers will strengthen themselves till their demands are met. ”

According to the farmers’ organizations, it is now the moral responsibility of the BJP to accept the results of today and cancel three agricultural laws and negotiate with the farmers and give a legal guarantee to the MSP. We are once again clarifying that this agitation of the farmers will not end until the demands are agreed.

At the same time, the Boycott of BJP and allies will also continue. The government, instead of making peasants workers their enemies, fought the Corona epidemic and other economic crises.

A Punjabi film with a unique concept and different story, Saunkan Saunkne is going to be released on 13th May 2022.