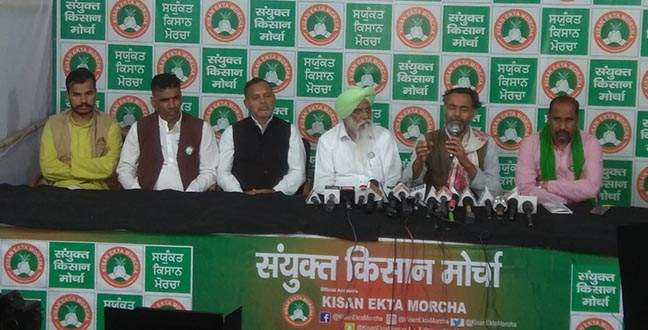 Singhu Border| Protesting against the agricultural law, the farmers completed the 96th day on Tuesday, during which a meeting was organized by the United Kisan Morcha on the Singhu border today. In this meeting, farmers’ organizations put forward a strategy for the coming days to complete 100 days of the movement. Farmer leader Balveer Singh Rajewal stated that “On March 6, there will be 100 days of protests along the Delhi borders. On that day there will be a 5-hour blockade on the KMP Expressway connecting the various protest sites along the Delhi and Delhi borders. “

“It will be jammed between 11 am and 4 pm and the toll plaza will also be exempted from paying toll fees.”

At the same time, SKM spoke of raising black flags in homes and offices in the rest of India, in support of the movement and in opposition to the government, while protesters have also been called to tie the black bandage that day.

The United Kisan Morcha has also formulated a strategy for the elections to be held in the coming time, under which the public will be appealed in the states where elections are going to be held.

Representatives of SKM will also visit these states for this purpose and participate in various programs.

According to the United Kisan Morcha, protests will be organized by the Samyukta Kisan Morcha on March 15, on the call of the central trade unions, supporting the ‘Anti-Privatization Day’.

SKM will support the call of trade unions, seeing this day as an ‘anti-corporate’ day, and will protest in unison.

Leaders of farmer organizations reported that, “SKM will launch an ‘MSP Deliver Campaign’ across India. Under the campaign, farmers will be shown the reality of the price of crops in various markets, highlighting the government’s claims and promises on MSP.” This campaign will be launched in the southern Indian states of Karnataka, Andhra Pradesh and Telangana. Farmers from all over the country will also be included in this campaign. ”

In fact, farmers have been protesting on various boundaries of the national capital since November 26 last year against three newly enacted farm laws.