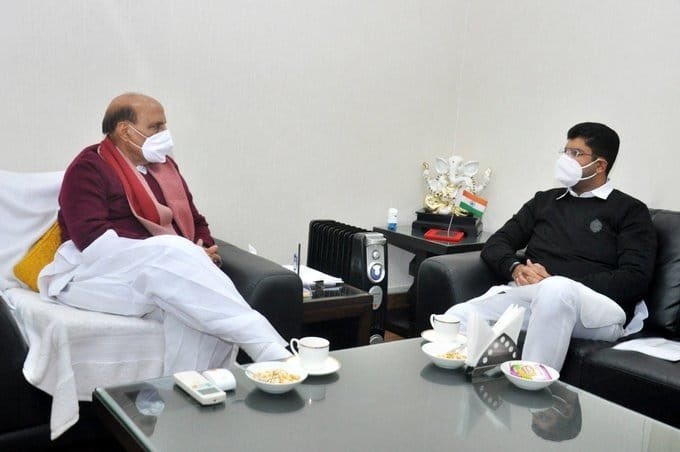 Haryana Deputy Chief Minister Dushyant Chautala stressed the resumption of the stalled dialogue between the farmer leaders and the government and said that the next 24 to 48 hours are very important. Due to the positive attitude of the government, the solution to the peasant movement is expected.

Dushyant Chautala expressed satisfaction with the MSP’s written assurance in a proposal sent by the government to the farmer leaders. Dushyant Chautala described it as a good sign to strive for continuous dialogue on behalf of the central government.

Dushyant Chautala apprised the three ministers about various issues of farmers in Haryana. Under the law made for pollution, the problems arising out of the lawsuits filed on the farmers were also told. He said that the government should once again bring the deadlock at the earliest by bringing farmers’ organizations to the negotiating table.

Explain that the farmers of Punjab and Haryana have been agitating since last November 26 against the three agricultural laws prepared by the central government. The farmers’ movement is going on along the Delhi border. Pressure has also increased on Dushyant Chautala following the resignation of Harsimrat Kaur from the post of minister in the central government from Akali Kota, an ally against agricultural laws. Farmer leader Dushyant Chautala, who was involved in the movement, has also appealed to resign from the post of minister.

However, Dushyant Chautala has said many times that he will not allow the MSP to come under fire while in government. Seven of the ten MLAs of Dushyant Chautala’s Jananayak Janata Party have supported the Kisan movement.

New Delhi | On the occasion of Republic Day, clashes between protesting farmers and police were seen at different places in the national capital. Meanwhile, a large...
Read more
Top Stories

Rekha Corona news: A staff member of Actress Rekha house has been found infected with Corona, after which the actress' bungalow has been sealed....
Read more

New Delhi :CM Arvind Kejriwal on Thursday paid a visit to AIIMS to meet the 12-year old girl who faced a barbaric assault in...
Read more