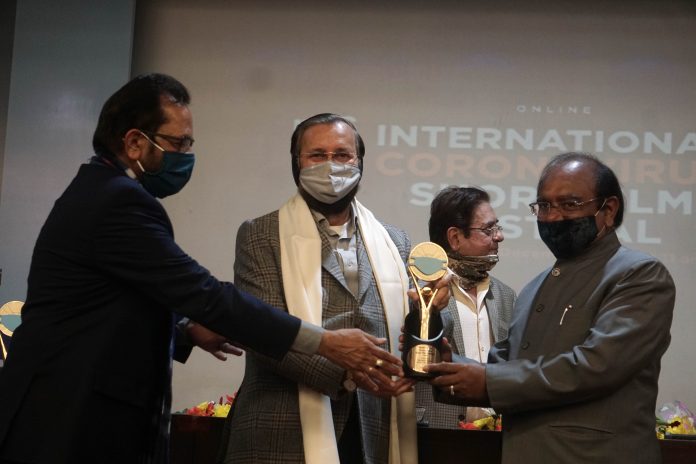 New Delhi: Amid the COVID-19 pandemic, Mumbai based Indian Infotainment Media Corporation has organized the screening and award show of the ‘Coronavirus Short Films at New Delhi. 2855 films from 108 countries had participated in the festival and showcased the stories based on Cure, Safety Measure, and Lives during the COVID-19.  Shri Prakash Javadekar was the chief guest and the festival was presided by Shri Mukhtar Abbas Naqvi.

Shri Prakash Javedekar Union Information and Broadcasting Minister have appreciated the initiative of IIMC to hold an International Coronavirus short film festival and said a large number of entries in the film festival is the testimony of the film making talents across the globe.

The smartphone revolution has also led to filmmakers, in particular, students adopting it in a big way to make short films.

In this co-text, Mr Javadekar said “the government gives support to short film making and appealed that filmmakers should make good short films that touch the life and heart of the people”

Shri Naqvi, Union Minister of Minority Affairs said that “due to the Corona pandemic, the shooting of films had largely been postponed for a long time. During this crisis, short films not only entertained the people but also made the people aware of the Corona challenge. Different channels, be it a news channel, an entertainment channel, sports, or business channel, all played a praiseworthy role in spreading awareness among the people regarding the Corona pandemic. The entire world is facing such a crisis in the form of the Corona pandemic after the centuries. Many generations have not seen such a challenge. Still, we have left no stone unturned to play the role of a mature society, government, cinema, and media, and especially in India, all these four sections became a part of the solution to the problem.

Mumbai| Shamita Shetty shared a stunning photo while Relaxing in the pool on Thursday. In the picture, Shamita is seen in an orange cut-out monokini with...
Read more
Entertainment

Game of Thrones GOT Season 8 Remake Petition 2021: Game of Thrones dominated pop culture for a decade but now is little more than a...
Read more
Entertainment

Is she gorgeous? Then why she is single?