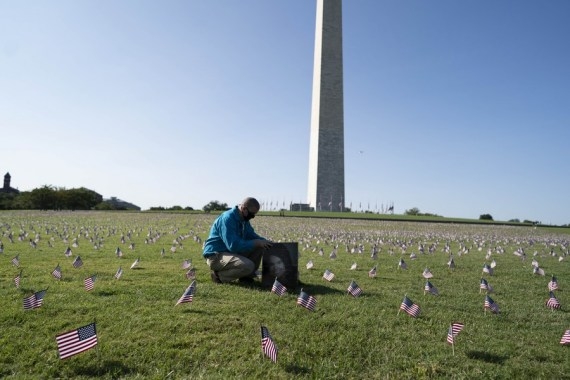 WASHINGTON | According to Johns Hopkins University, the number of deaths due to coronaviruses in the US has crossed the horrific mark of 2.5 million. The university’s Center for System Science and Engineering (CSSE) said in its update on Thursday that the number of deaths in the country has risen to 2,50,483 and the number of cases to 1,15,25,149.

According to the report of Xinhua, New York State has the highest number of 34,173 people killed, followed by 20,147 people due to the virus in Texas. California, Florida and New Jersey states have recorded more than 16 thousand deaths. States with more than 9 thousand deaths include Illinois, Massachusetts, Pennsylvania, and Georgia.

The magnitude of the epidemic in America can be gauged from the fact that only 18 percent of the world’s total deaths occurred here. On September 22, the figure of 2 lakh deaths was completed here and in two months, 50 thousand deaths occurred.

There were 1,707 deaths due to Covid here on Tuesday, which is the largest figure since May 14 of 1,774 daily deaths.

According to forecasts by a model of the University of Washington’s Institute for Health Metrics and Evaluation, 4,38,941 Americans may die from the virus by March 1, 2021, given the current situation.

Experts have warned college students and those traveling to attend family gatherings during the Thanksgiving holiday that this could create a new wave of coronavirus infection.

New Delhi | Prime Minister Narendra Modi on Tuesday said that an independent and inclusive Indo-Pacific region is being promoted through the Quad. This is a common...
Read more
Top Stories

India and US sign new investment promotion agreement in Tokyo

New York| A gunman has killed at least ten people in a supermarket in the US state of New York. Local media gave this information. The gunman...
Read more

Not Sachin Tendulkar! Shoaib Akhtar picks this person as the ‘bravest Indian batsman’ ever…

Implementation of e-Governance with 49 Online Services in NDMC