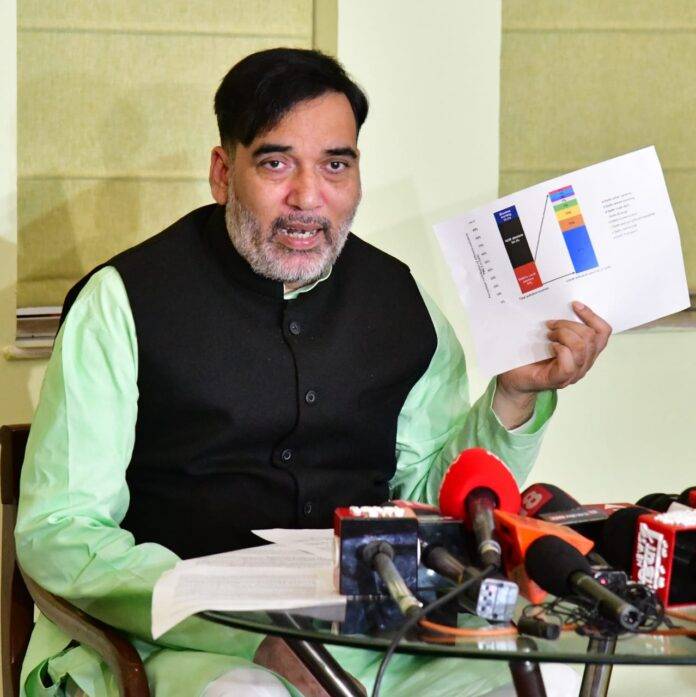 Environment Minister Shri Gopal Rai said, “For the last several days, there has been continuous chatter about pollution inside Delhi. About possible reasons, whether the pollution’s from outside or inside Delhi, if it’s because of vehicles or biomass burning. These conversations are happening everywhere, from the court to media houses.”

Continuing, he said, “In Delhi, a source apportionment study was done by the Energy and Resource Institute (TERI) in 2016. That study had put forward the fact that 64% of the pollution in Delhi comes from outside and only 36% is from inside Delhi. But the study was from 2016, so the question would arise whether the situation has remained the same since 2016. For this, a well-known organization working on pollution, the Center for Science and Environment Studies (CSE) collaborated with a Central Government institute, i.e. Indian Institute of Tropical Management (IITM). IITM releases data through the app SAFAR. The CSE took the data from the Decision Support System (DSS) for 15 days per hour from 24 October to 8 November and analyzed it. According to the analysis carried out by the CSE on data provided by a Central Government institute, the pollution inside Delhi is 31% from within Delhi and 69% of pollution is from outside.”

He added, “If you take a rough estimate, then 30% of the pollution is done by the people of Delhi and 70% of the pollution is coming from outside Delhi. The report which CSE has released after analyzing the SAFAR data matches with TERI’s 2016 report, in which it said 36% was Delhi’s contribution. This contribution has actually been reduced to just 31% now. The external contribution in the 2016 report was 64% which has now, according to the CSE report, increased to 69%.”

He elaborated, “They have provided multiple charts in this report and one column mentions the contribution of the burning of biomass. At that time, it was 14%. Since then, instances of stubble burning have only increased. In the supreme court yesterday, the central government accepted that the statistic they had given, of 4%, was of the entire year. At this time, the contribution of stubble burning is 35-40%. If you look at this black chart, it shows the 54% contribution to Delhi’s pollution from external sources. This red chart shows 31% contribution.”

Shri Gopal Rai said, “The people of Delhi have been blamed unnecessarily, that they have stirred poison into their own air when the data presented by both TERI and CSE show the same thing. This is the Central Government’s own analysis that the pollution generated within Delhi is only 30 percent of the total pollution. 70% of this pollution is coming from outside. The Delhi government has constantly been working to reduce the pollution from Delhi. But no matter how hard the people of Delhi try, controlling the 70% external pollution is out of their hands. Therefore, I have repeatedly requested the Union Environment Minister to have a Joint Meeting to frame a Joint Action Plan. Until we formulate this plan and set in place teams to monitor its implementation, Delhi and its people will not be rid of this pollution.”

He stated, “We are constantly working to reduce the pollution coming from within Delhi. The campaigns we are running are all within Delhi, no campaigns are running outside. In the joint meeting held in September, we informed that we had brought down emissions caused by generators by ensuring 24/7 electricity to the people of Delhi. We had appealed that the same be done for all of NCR. In Delhi, we converted around 1500 industries to CNG-based which had previously been running on pollutant fuel. According to the Commission for Air Quality Management, the same was to be done for the entirety of NCR, but it never happened. They just do a little work here and there to fill the paperwork, that’s it. We had made this appeal in the previous Joint Meeting where the Union Environment Minister, the Chief Ministers of Haryana and Punjab, the Environment Ministers of Rajasthan and Uttar Pradesh and I were present.”

Further, he said, “There are no brick kilns within Delhi, but there are many right outside. For years, there has been talk of having them make the move to advanced technology, but nothing is ever done. All the pollution from these kilns is entering Delhi. Now, they are talking of an emergency shutdown of the thermal power plant. But, the suggestion to help it move on to advanced technology has been postponed every time. All around Delhi, construction work is continuing unregulated and there have been no attempts to restrain it.  The sources within NCR, which are approximately 54%, are permanent and keep working.”

He added, “At this time, the Central Government has accepted in the Supreme Court that the contribution of stubble burning is 35-40% of the total pollution. In light of this, I would appeal for 2 things. First, to the people of Delhi. This 30% contribution too needs to be brought down. This is why, to control vehicular pollution, we are going ahead with the “red light on, gaadi off” campaign. All public transport within Delhi runs on CNG, but a lot of the vehicles that enter Delhi run on diesel and are contributing to the pollution. The decisions imperative to solving this problem cannot be taken by the Delhi government.”

In his appeal to the Union Environment Minister, he said, “A joint meeting of all Environment Ministers associated with the Delhi region be held so a joint action plan could be formulated based on the facts and data. The responsibilities of all governments need to be fixed and policies are developed to act on those who refuse to implement these. We need to move beyond temporary measures and plan something long-term. The 70% external pollution needs to be curbed and, in this regard, the Delhi government is willing to support the central government in any way so that we can have a permanent solution along with a temporary one.”

Facebook
Twitter
Pinterest
WhatsApp
Previous articleMs. ISHA KHOSLA IS NDMC NEW SECRETARY.
Next articleIndia is poised to become a hub of the cinematic ecosystem: Anurag Thakur
Abid Ali
Sr. Content Editor & Social Media Manager at Janmat Samachar. Has Passion for writing about the Nation & the World and irrefutably telling about their issues to the masses.