Schools, colleges & all other educational institutions to remain closed till 20th November, with exceptions for ongoing exams 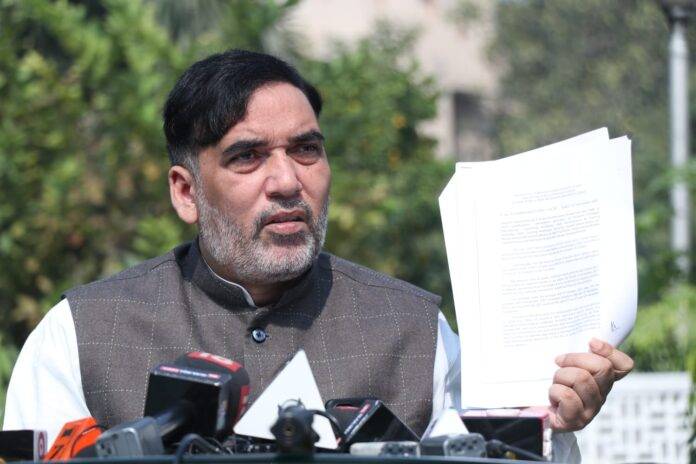 NEW DELHI: Delhi Government has taken another step to escalate its fight against pollution. The Environment Department today issued orders regarding shutting of institutions under the Environment Protection Act of 1986, informed Environment Minister Shri Gopal Rai. Schools, colleges, skill development centres, educational institutions will remain closed till 20th November, with exceptions for ongoing exams. Construction & Demolition projects have been put on hold till 17th November to curb dust pollution that they are major sources of. Delhi Government’s offices  and government autonomous agencies will also remain closed till 17th November. The major objective behind these emergency measures is to cut down on vehicular pollutants, to give the people of Delhi some relief. An advisory has been issued to private offices to follow suit and help this initiative have an effective impact on the pollution levels.
Delhi Government takes another step to escalate its fight against pollution; held joint meeting of concerned authorities
Talking about the Delhi Government’s latest step in fighting pollution, Environment Minister Shri Gopal Rai informed, “Yesterday, under the leadership of Chief Minister Shri Arvind Kejriwal, the cabinet and the officers held a joint meeting to address the rising levels of pollution in Delhi. Officers of the DPCC held presentations which clearly depict that Delhi is suffering from two kinds of pollution – One, which is Delhi’s own, i.e., sourced from within Delhi like vehicular emissions, construction site fumes, waste burning, etc. And two, the incoming pollution as a result of stubble burning from other states.”
Orders issued under EPA – schools, colleges, other institutions to remain shut until 20th November, construction sites and govt offices till 17th November
He further elaborated, “The severity of the pollution was quite high yesterday, compared to which today seems a bit of a relief. However, it has been estimated that the pollution levels are only going to escalate in the coming days. Keeping this in mind, the Delhi Government has decided that all schools, colleges, coaching institutes, skill development and training institutes and libraries will remain shut till 20th November. The Environment Department has issued orders regarding this today under the Environment Protection Act of 1986. The only exception will be made for institutions already in the process of conducting examinations. Rest all other schools and colleges will be strictly shut. Second, all construction projects and demolitions taking place in Delhi will be halted till 17th November, be it at any scale – small or large construction sites. Post this, we will review the progress and make appropriate decisions. Third, all offices, corporations and autonomous agencies under the GNCT of Delhi will remain shut till 17th November and all officers will be expected to work from home for the week.”
Emergency services like health, police, PWD, DPCC, district administration and others exempted
The Environment Minister continued, “However, any institutions providing emergency services will be exempted from this order. This includes health and all related departments and services, police, jail, home guard, fire service, district administration, DPCC, Environment Department, Pay and Accounts Office, Electricity Department, PWD, Irrigation and Flood Control Department, Water Supply and Sanitation, Public transport – air, railway, metro, bus. Additionally, the services supporting public transportation like cargo, ticketing, air flight, disaster management services, NIC, Municipal service, etc. will also be exempted.”
Issued advisory to private institutions; will win this battle against pollution
He concluded, “The purpose of shutting offices and such non-emergency institutions is to cut down on vehicular pollution in the NCT of Delhi. And the construction sites have been halted to control the contribution of the fumes from these projects, to curb dust pollution. Hence, a notification has been issued today regarding all these points. Moreover, advisory notices have been issued to private institutions encouraging temporary work from home to make our fight against pollution as effective as possible.”
CM Arvind Kejriwal had taken these tough decisions in an emergency meeting yesterday
Chief Minister Shri Arvind Kejriwal held an emergency meeting with cabinet ministers and officials at the Delhi Secretariat yesterday to deal with the rising pollution in Delhi and provide immediate relief to the people of Delhi. In this meeting, it was decided that all schools, colleges and coaching institutes, etc. will remain closed for a week in Delhi. All the government departments under the Delhi government will also remain closed and the officers and employees will stay at work from home. Along with this, it was decided to issue advisory to private institutions to allow maximum work from home to their employees and to keep all construction activities closed till November 17. Since it is a question of everyone’s health and life, therefore, the aim of the Delhi government is to deal with the increasing pollution as soon as possible and provide relief to the people of Delhi at the earliest.
Kejriwal government is taking five concrete steps to control pollution
It is noteworthy that Environment Minister Gopal Rai had held a high-level meeting with the concerned departments at the Delhi Secretariat on November 9 to control the increased pollution in Delhi after Diwali. In this meeting, it was decided to take five strict steps to provide relief to the people of Delhi from pollution as soon as possible. According to the decision taken in the meeting, an anti open burning campaign will be run from November 11 to December 11to reduce the pollution inside Delhi. Apart from this, the concerned departments have been directed to shut down diesel gensets and coal kilns in Delhi, increase parking fees, increase the frequency of metro and bus and provide heaters to guards from RWAs. The second phase of the Anti Dust Campaign is being run from November 12 to December 12 in Delhi. Also, instead of 114 tankers, now 400 tankers will be sprinkling water. Also, by November 20, the Delhi government will complete the work of spraying bio-decomposer solution for stubble decomposition in 4,000 acres of fields.