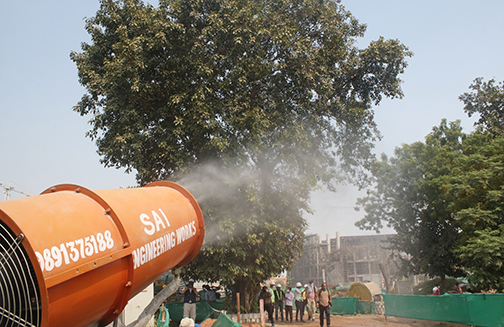 Chief Minister Arvind Kejriwal said, “Anti-smog guns are mounted on trucks with BS-6 engines. This engine will cause very less pollution, which will play an important role in reducing air pollution. The anti-smog guns have a capacity of 5000 liters. Is a water tank. It will continue to work for 3-4 hours. A 5000-liter water tank can wash the trees on the middle sides of the road, pavement and track, as this anti-smog gun transforms water into fountains. And eliminate particulate matter from the air. ”

PWD has already deployed about 23 anti-smog guns at major intersections and construction sites to combat dust pollution in Delhi. To combat dust pollution, the PWD department has also claimed responsibility for sprinkling water on trees, roads and construction sites. According to the Delhi government, on the instructions of CM Arvind Kejriwal, the number of anti-smog guns and water tankers will be increased as and when required by the authorities.

The Delhi government has expressed concern over the rising air pollution levels in the capital. According to the Environment Committee of the Delhi Legislative Assembly, the fire in the landfills at Bhalswa and Ghazipur has polluted Delhi’s air.

Atishi, chair of the Environment Committee of the Delhi Legislative Assembly, said, “The reduction in incidents of farm fires and the efforts of the Delhi government to control the city’s pollution had reduced air-pollution levels. But fires at Ghazipur and Bhalaswa landfill sites The events in Delhi contributed to the increase in pollution, which spoiled all efforts of the Delhi government. Strict action should be taken against the officials responsible for the fire. “