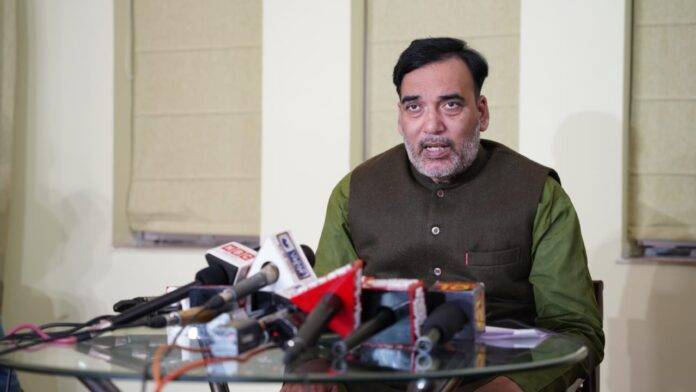 NEW DELHI:  The Kejriwal government has banned the construction works in Delhi till further orders in view of the rising pollution situation. Delhi Environment Minister Shri Gopal Rai said that the entry of goods trucks into Delhi will remain closed till December 7. Essential commodities and CNG-electric trucks can come to Delhi. The third phase of the ‘Red Light On Gaadi Off’ campaign will continue till December 18. Offices have been opened by ending the work from home directive for government employees. Special buses have been started from 14 colonies so that employees do not have to come to the office by private vehicles. The drive to check the vehicles causing pollution will continue and fines of rupees ten thousand each have been imposed on 14 thousand drivers in two months.

While addressing a press conference, Environment Minister Shri Gopal Rai said, “We held a meeting with officials of all departments to review the current pollution situation in Delhi. In the meeting, the experts suggested the possibility of pollution levels in Delhi remaining in the ‘very poor” category. But if the Meteorological Department’s prediction of rainfall is correct, then the situation might change. Under these circumstances, it was decided today that all construction and demolition work in Delhi will be banned till further orders. Under this, electrical work, interior decoration, plumbing, and carpentry can continue. Along with that, all construction workers will be given a compensation of 5000 rupees.”

He added, “I would like to clarify here that not all vehicles have been prohibited from entering Delhi. Entry of goods trucks into Delhi is banned till the 7th of September. CNG and electric trucks are exempt from this and can enter Delhi. Registrations of around 1000 such vehicles have been found. The 2nd phase of the “Red Light On, Gaadi Off” campaign is to end on the 3rd of December. The third phase of the campaign will start immediately after that and will extend till the 18th of December.”

The Environment Minister continued, “Schools, colleges, and institutes have reopened in Delhi today. Along with that, the work-from-home directives for government offices have also been lifted and people have started coming to their offices. We will start special bus service for colonies where government employees live in huge numbers. There are 14 such major colonies – Gulabi Bagh, Mayur Vihar Phase 2, Motia Khan, Shalimar Bagh Block A, Timarpur, Hari Nagar, Sector 3 Dwarka, Nimri Colony, Ashok Vihar, Sector 11 Rohini, Karkardooma, Model Town Phase One, Vikaspuri, Paschim Vihar, and Vasant Kunj. Around eight 8:30 in the morning, the bus will leave from their colonies and come to the Secretariat. In the evening, they will leave around 5-5:30 PM. This will enable them to come work at the office and reduce vehicular pollution at the same time.”

He stated, “The campaign against open burnings in Delhi will continue. Until now, 8480 sites have been visited and inspected by our teams under the open burning campaign, and violations were found in close to 1000 places. The violating agencies, organizations, and individuals have been fined 28.76 lakhs so far. Apart from that, the water sprinkling campaign by PWD, all MCD’s, and the fire brigade will continue. All departments have been directed to continue all campaigns until further orders. There are vehicles inside Delhi that are producing a lot of pollution and do not have a PUC certificate. The Transport Department and the police will continue checking for PUC certificates. 18 lakh PUC certificates were issued in October and November. Of the people who did not have a certificate and were caught violating the norms, 14,000 people have been fined 10-10 thousand rupees in the past 2 months. Along with that, the transport department has also been instructed to carry out an awareness campaign. 30 lakh people were sent SMS texts asking them to get their PUC certificates made or they will be fined a penalty of 10 lakh rupees.”

Shri Gopal Rai said, “Given the current situation of pollution, all these measures will continue. Our appeal to the people of Delhi is that we do not need any kind of laxity at this point. Anywhere, if you think that the construction is stopped and someone is violating the norms by carrying out construction activities in secret, or if you think trucks are entering somewhere, or if you see someone start a fire you can inform us through the Green Delhi App by taking a photo and uploading it. We will ramp up our plans and measures, keeping in mind the input you provide through the Green Delhi App.”

New Delhi | The Election Commission of India (ECI) on Saturday extended the ban on rallies and roadshows with physical presence till January 22. The Election...
Read more
Delhi

For the first time in 233 years, MCC will get women president, Clare Connor to replace Kumar Sangakkara

UP Board Result 2020 declared UP board 10th result name wise https://upmsp.edu.in