Since its launch earlier in the day, ‘Green Delhi’ App receives 228 complaints related to various departments 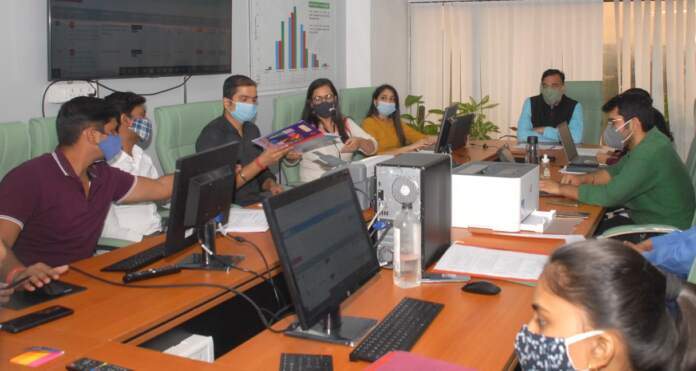 New Delhi: Environment Minister Shri Gopal Rai on Thursday said that around 228 complaints related to various departments have been registered until now since the launch of the ‘Green Delhi’ App by CM Shri Arvind Kejriwal earlier in the day. He said that around 21 departments, both the Central government and Delhi government monitored, have been attached to the app, with separate nodal officers and coordinators for effective resolution of the complaints. He said that a meeting on the complaints received and overall monitoring with the nodal officers and coordinators of every department will be conducted on November 2 at 4 PM.
Shri Gopal Rai said, “Around 228 complaints, related to different departments, have been registered on the ‘Green Delhi’ App which was launched today. A system has been created in the Green War Room for daily and effective monitoring of the complaints. Around 21 departments, including MCDs, DDA, DJB,Delhi Police, DSIDC, Delhi Government departments, etc are attached to the app. Every department has a nodal officer attached with it along with the senior officer who is incharge of all the complaints registered related to the department. A team for overall coordination has also been deployed. Around 12 coordinators have been assigned to the green war room who will check every complaint and overlook the resolution of all the complaints as per the timeline, especially a specified timeline of 48 hours. If the complaints are not resolved within 48 hours, they will coordinate with the senior officials of the departments and work to resolve the complaints. For the monitoring of the complaints, we are deploying 70 Green Marshals. For instance, if a complaint is being registered repeatedly despite being resolved, the green marshals will visit the location to inspect the situation for any false reporting.”
“Since the app has been launched today, the complaints received in the next 2-3 days will be monitored department-wise. A meeting on the complaints received and overall monitoring with the nodal officers and coordinators of every department will be conducted on November 2 at 4 PM. The live monitoring of the war rooms has been going on. We have also prepared an internal dashboard. We aim to strengthen our fight against pollution in our ‘Yuddh, Pradushan Ke Viruddh’ campaign of the Delhi Government,” he added.
Shri Gopal Rai said that the Delhi government has launched a massive ‘Red Light On, Gaadi Off’ campaign in Delhi against vehicular emissions. We are launching the campaign in all the 272 wards of Delhi. The app has been launched for the effective resolution of issues caused due to local pollutants such biomass burning construction activities, industrial activities, etc. The bio decomposer solution has been used on the farmlands in Delhi, which has helped prevent stubble burning in Delhi. We will get the final report on it on November 4. But the massive campaign launched by the Delhi government to combat internal sources of pollution in Delhi has been happening for the first time in the country. The government is also going to launch an anti-cracker campaign in Delhi from November 3, to prevent the pollution caused by burning crackers this year.
On the formation of the Commission for Air Quality Management by the Centre, Shri Gopal Rai said, “Stringent steps do need to be taken to curb pollution, but taking action is better and more important than forming teams. These powers were granted by the Supreme Court to CPCB and EPCA earlier as well, but these powers are useless if there is no action. Recently, generators were allowed to operate in Noida. In this case, no committee would work. We shut down thermal plants in Delhi despite having no special committee in Delhi. The central committee needs to act against the 11 thermal power plants around Delhi that are causing pollution. Law is necessary, but if there would be no action, then biomass burning, stubble burning, thermal power plants, and implementation of different policies in Delhi and other states will continue.”
Advertisement

New Delhi: With the call for ‘Chalo Dilli’ made by the All India Kisan Sangharsh Coordination Committee (AIKSCC)  farmers have been marching to the...
Read more
Delhi

Farmers protesting against agricultural laws have camped at Tikri and Singhu border. However, farmers from Punjab who have come to Delhi have been allowed to...
Read more
Delhi

Mumbai: A 5-year-old tweet from writer Chetan Bhagat has suddenly gone viral on Twitter, in which he has announced Sushant Singh Rajput as the...
Read more

Ajmer suicide news: The sensation spread in the District Collectorate Complex of Ajmer in Rajasthan when a young man cut veins or the nerves...
Read more

New Delhi: Government has embarked upon a major reform on ease of doing business by seeking stakeholders' views, by June 23, 2020, on its intent...
Read more