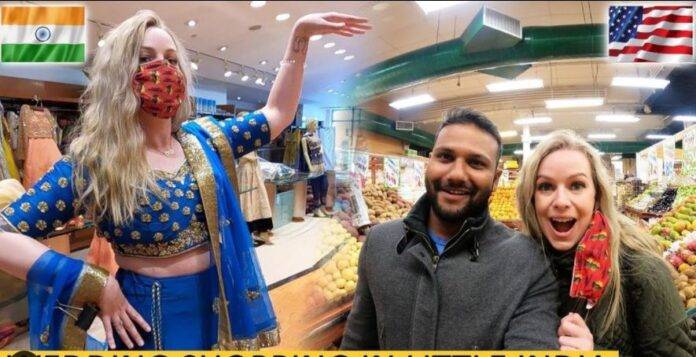 Love Story of Debajyoti from Orissa India & Kari Crawford from Florida USA: Today we got this wonderful opportunity to interact with Ms. Kari Crawfor, from USA and Mr. Debajyoti, from India and we discussed how they met. This is a very interesting love story and we are sure you will enjoy this article. They have their Youtube and Instagram karileighc channel as well. So let’s witness their journey. Interracial dating in America, Interracial marriage article.

Interracial Love Story between an American Girl and an Indian Man

DJ (Debajyoti) is originally from Rourkela, Odisha. He is 34. Kari is originally from St. Cloud, Florida in the USA. She is 31. He is in the consulting industry- specifically risk management and business continuity. She is in the hospitality industry as a General Manager. They met through their jobs.

He was living in Chicago Illinois and she was living in Atlanta Georgia. He would fly to Atlanta for work every week. He came into the cocktail lounge and cigar bar that she was managing with his boss and some coworkers in 2019 and She happened to walk by his table and check on his group.

While she was there he said “this might be awkward, but are you single” and she responded “yes I am, why? Are you asking me out (on a date)? And he said “yes.”

They went on several dates and then he proposed to her on July 18, 2020. They will be having an American wedding on 8/27/21 here in Chicago Illinois where they currently live and then a wedding in India on 12/2/21 in his hometown of Rourkela. They will be in India for about 25 days before during and after the wedding.

They have a relatively new YouTube channel under the same Instagram name “KariLeighC” where they vlog about their relationship, cooking, my Hindi learning experience, and every day life. They will be posting a lot of wedding content later on, as well as travel when they are in India.

When I met DJ for the first time he was sitting at a table in a group of people I didn’t recognize. I walked over to the table and a man in a lavender(purple) colored top caught my eye (DJ). I asked his group if they were enjoying their cocktails and if they had ever visited the cocktail lounge before, some of them including DJ said yes. I was surprised to hear that because I felt sure I would have noticed DJ previously, but somehow he had alluded me until then. I took some of his group into the humidor where the cigars were kept and discussed the collection of cigars. When I came back to the table he asked me if I was single as mentioned in my previous email.

2) As DJ is from India and we have different cultures and traditions in India, how easy for both the families to agree on this relationship, what hardships have you both faced to convince your families?

My family knew about DJ before the second date. I told them how much I liked his demeanor, genuine personality, and overall, how kind and polite he was on the first date. They were very accepting and just wanted me to be happy. DJ’s family- due to cultural differences learned about our relationship a little later on when we were both sure that we wanted to continue to move forward in the relationship regarding marriage. They could hear the happiness in DJ’s voice (as he described it) and were instantly accepting as well. We have both been very fortunate that our families were so accepting.

3) DJ, was it a “Love at first sight” moment for you? Interracial dating in America

An emphatic YES! As they say “you know when you know”. When my eyes first came across Kari, something innately told me “this is real, and this is forever”. I obviously didn’t know what I could do, how I could do, where to start, and why would anyone find it NOT remotely creepy. Despite the apprehensions and social awkwardness, I told myself “I don’t want to regret the rest of my life, losing my chance to ask her out”. My inner voice won, and I mustered JUST enough to take the first step….rest is history!!

4) Since you live in two different zones and you both might be very busy, how did you manage to give time for each other?

We made each other a priority. We text each other several times a day and DJ would call me every so often. He traveled for work to my city (Atlanta) Monday -Thursday every week from Chicago at the time and so we would go on one or two weekday date nights each week. I eventually moved to Chicago so that we could see each other more often.

5) When you both first met at the “Cocktail lounge and cigar” bar, did you feel awkward that a guy asked for a date in the very first meeting? What was going on in your mind?

I did feel slightly awkward. I was not used to being asked out (to DJ’s surprise) and it was the first time I had taken someone up on their offer of date while at my place of work.  I was very nervous when he asked, but something made me say yes and I am, to this very day, very grateful for whatever swayed me in that direction.

6) What is the most important thing in your love story?

It is simply unfair and incomplete to try and quote the “one” important thing. I believe it is a perfect amalgamation of all the attributes that we have been looking for in our respective life partners. Yes, does sound cheesy…but it is so damn true. The one thing that we hold dear is each other’s feelings. Yes, not everything is picture perfect and rosy, we do have fights and qualms about each other’s shortcomings, but we put each other’s feelings before anything else. You see, when you truly love someone, everything else seems irrelevant because love transcends all.

7) Kari how do you find Indian culture different compared to American culture?

It varies greatly from the culture I grew up with. I think that there are lessons to be learned from each. I love the closeness of family and the emphasis on family in Indian culture. We are raised to be very independent of young age in the USA. On top of that, I grew up in a very small family. That’s not to say that I wasn’t surrounded by loving people, but we didn’t spend as much time with relatives as is typical in India.

8) People tend to become good after getting into a relationship, Did you both change for each other? Could you elaborate on it a bit more?

I think we definitely make each other better people. I think in general, that’s how you know you’ve found the right partner.  DJ would say I’ve made him kinder and more patient. I think I have also made him more accepting of others. I would say that he has made me more ambitious and confident in myself. I have always been very shy and I am thankful for his patience in helping me to grow into myself.

9) At last what would be your message to your fans and to the vibrant youth of your country?

Rise above and stay true to who you are.

Monuments and statues will no longer be victims of vandalism in the US, Trump signed executive orders