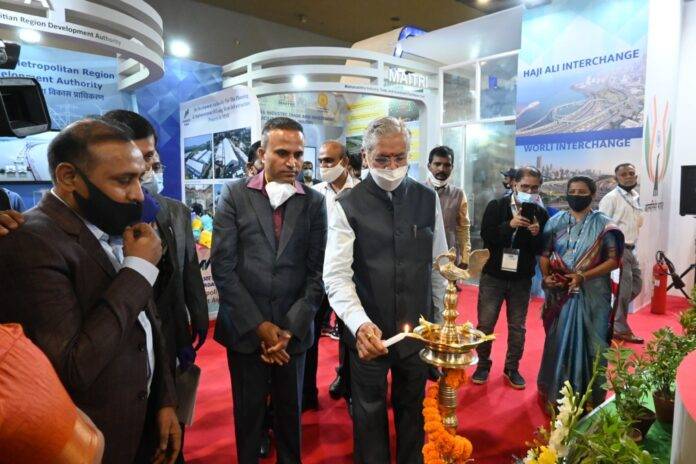 New Delhi: “The industrial agreements (MoU) of three lakh 30 thousand crores had been signed in Maharashtra state in last two years. The investors have given their first preference to Maharashtra”, this information was given by the minister of industries (Maharashtra), Mr Subhash Desai.

He was speaking after inaugurating the Maharashtra Gallery (Pavilion) at the 40th India International Trade Fair (IITF) organized at Pragati Maidan in New Delhi on Sunday. Managing Director Pravin Darade and other senior officers of Maharashtra small Development Corporation were also present on the occasion.

Speaking ahead, Mr Desai said that during the financial year 2019- 20 and 2020 – 21, the nation was passing through hard times due to Corona pandemic yet there was a huge investment in Maharashtra. About three lakh 30 thousand crore industrial Memorandum of Understanding (MoU) were signed in this period. He said that through this medium, the infrastructural facilities and skilled human resources will be made available and people of Maharashtra will be benefited by it. He further asserted that Maharashtra state is always leading the nation in industrialization and this trend of industrial development is also experienced at the Pragati Maidan where the Maharashtra Pavilion has been erected, Mr Desai added.

50 different clusters in the state
Mr Desai said that in order to give a fillip to the rural culture the Maharashtra, the government has taken initiation to prepare industrial groups for handicrafts, leather goods, textile, food, bamboo, rubber and terry towel. He said that presently 50 clusters has been started in the state and as per the demand. the number will go on increasing. Mr Desai also said that the Paithani cluster which is the pride of Maharashtra is also erected and due to this, the industrialists from various villages have come together adding that all the required facilities are being made available for them which has proved to be beneficial for the industrialists.

Bulk drug Park
Mr Desai said that the bulk drug park is an ambitious scheme of Maharashtra government and these parks are constructed at Pune and Nashik. This has positive effect on the production of medicine. He exuded confidence that this will also give a boost for employment generation.

Maharashtra ‘Electric vehicle policy’ declared
Mr Subhash Desai further said that recently, two months back the industries, transportation and environment ministries of the government of Maharashtra had jointly declared the electrical vehicle policy. He said that subsidy of one to three lakh is been giving for getting more response from the customers. He said that this will attract the vehicle customers.

Mr Desai further said that the use of electric vehicles will give a sigh of relief to the consumers from the costly fuels and at the same time respite from the pollution. He said that along with the customers, the industrialists will also be given more facilities to boost the morale of the investors. He said that Tata and Telsa group have expressed their wish to invest in it adding that meetings are on and all these positive steps will definitely provide momentum to the use of electrical vehicles.

This year, the concept of Atma nirbhar (self reliance) has been made the theme of the India International Trade Fair where Maharashtra has exhibited various stalls including that of development of digital and e-Technology export, small scale industries, policies for giving a fillip to the startup and other such topics.
Maharashtra state has erected 13 stalls under the public sector ventures of Maharashtra state. This include stalls of Self Help Groups (SHG’s), seven of various artists, stalls which come under the micro, small and medium industrial group clusters and the stalls of startups.

This exhibition had been opened from today and the business class will have the entry till 19th of November whereas it will be opened for the common people from 20 of to 27th of November. The entry fees will be charged for the exhibition and the admission tickets can be purchases from 65 stations. The Maharashtra Pavilion is situated in Hall number -2 at the newly constructed building at Pragati Maidan. The office bearers of Maharashtra small Development Corporation had appealed the people to visit the Maharashtra gallery in large number.

Facebook
Twitter
Pinterest
WhatsApp
Previous articleSchools, colleges & all other educational institutions to remain closed till 20th November, with exceptions for ongoing exams
Next articlePrime Minister will inaugurate Poorvanchal Expressway today, the development will gain momentum
Abid Ali
Sr. Content Editor & Social Media Manager at Janmat Samachar. Has Passion for writing about the Nation & the World and irrefutably telling about their issues to the masses.

Which Trimmer Blades are Better Titanium Or Stainless Steel?

Titanium or Stainless Steel Trimmer? Let us know which trimmer blades Stainless Steel or Titanium are better and which one we should select before buying....
Read more
Business

Kejriwal spoke to the Home Minister, asked for help

Comedian Trevor Moore, who grew up in Charlottesville, dies in accident