Home National Delhi I have not come here as a Chief Minister, I have come...
NationalDelhiTop Stories 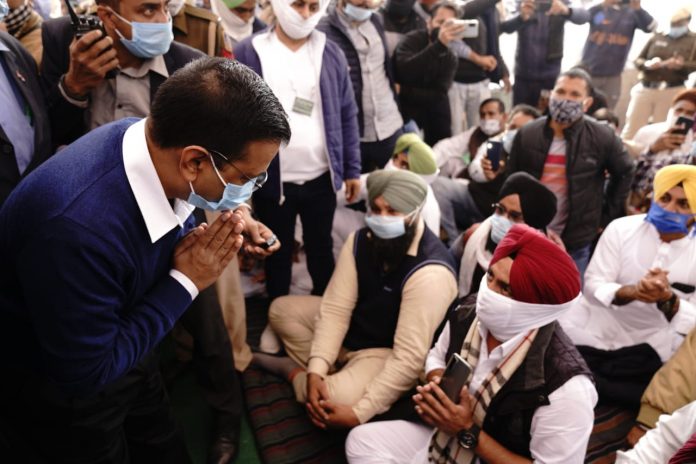 Chief Minister Shri Arvind Kejriwal on Monday visited the Singhu border along with Dy CM Shri Manish Sisodia, Shri Satyendar Jain, Shri Rajendra Pal Gautam, Shri Imran Hussain to inspect the arrangements made in the area for the farmers protesting against the three anti-farmer laws of the central government. He said that setting up of toilets, proper sanitation and availability of water have been ensured on the protest site and the farmers are satisfied with the arrangements made. He also said that he is not visiting the area as the Delhi CM, but as a ‘sewadar’ of the farmers. Reiterating his support for the farmers’ call for ‘Bharat Bandh’ tomorrow, he appealed to the people of the country to peacefully participate in the bandh tomorrow. He said that the Central government had a full proof plan to put the farmers into jails located in the stadiums to bring an end to their movement. ‘But we listened to our conscience and refused to convert stadiums into jails,” said the CM.
CM Arvind Kejriwal said, “Our cabinet ministers, MLAs, volunteers, and I, everybody is serving the farmers. I am not present here as a Chief Minister, I have come here as a sewadar, I have come here to serve the farmers. The farmers put in all their hard work and efforts and grow food for us. They are in a huge problem today, and it is the responsibility of all the citizens of the country to stand with the farmers and work for their service.”
“I have come here today to inspect all the arrangements in the area. I have seen that the toilets have been set up and sanitation has also been ensured. The water will be diverted inside with the help of water pipes and motors. I have seen the living and food arrangements,” he added.
CM Arvind Kejriwal said that the farmers are satisfied with all the arrangements made for them. “Our MLA Jarnail Singh ji was here last night in support of the farmers. Our MLAs, ministers, officers are serving the farmers. I hope the issue is resolved as soon as possible,” said the CM.
CM Arvind Kejriwal said, “AAP is supporting the farmers’ call for ‘Bharat Bandh’ for tomorrow, i.e., December 8. All our volunteers from across the country will participate in the bandh tomorrow. I appeal to the people from across the nation to participate in the Bandh peacefully.”
“The news of the changing of four mandis in Delhi is a rumour. There was a lot of pressure on us to convert the stadiums into jails. The Central government had a full proof plan to put these farmers into jails located in the stadiums to end the movement. But we listened to our conscience. Sometimes, you are less worried about the results of actions, and you listen to your conscience more to know what’s right,” added the CM.

New Delhi | According to the daily health bulletin released by the Delhi government on Monday, the national capital recorded 131 new Covid cases with an...
Read more
Entertainment