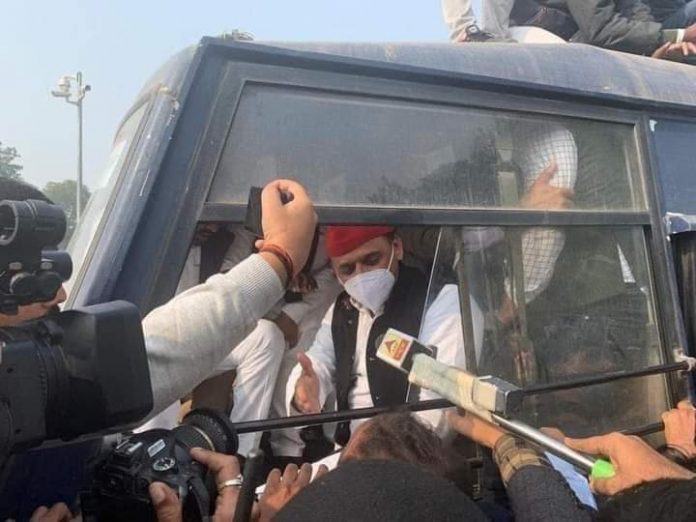 Samajwadi Party national president Akhilesh Yadav, who is going to Kannauj to join the Kisan Yatra, has been taken into custody by the police in the capital Lucknow on Monday. He has been taken to Eco Garden. Before this, Akhilesh Yadav left his house in Kannauj to join the proposed Kisan Yatra in Lucknow, when the police stopped his convoy, after which Akhilesh Yadav walked on foot. When he was prevented from proceeding, he sat on a dharna on the road, on which the police took him into custody for violating Section 144.

Akhilesh said that when farmers can sit on dharna then why can’t I sit. I was scheduled to go to Kannauj. I am not being allowed to go there on the strength of the police. SP chief Akhilesh Yadav was taken into custody after staging a sit-in for about 45 minutes. Along with this, Akhilesh Yadav has also given notice of breach of privilege to the Speaker of Lok Sabha.

SP chief Akhilesh Yadav sat on a dharna in the middle of the road at Bandriabagh intersection. He said that the BJP has made the coronavirus an excuse. The Coronavirus is not anywhere for the BJP to organize any event, but if the opposition does anything anywhere, the government makes an excuse for Corona. Now this government is doing a lot of dictatorships. We are being stopped everywhere by the police. Akhilesh Yadav said that the BJP government is strangling democracy. The government is not listening to the farmers. Farmers, poor, laborers are all worried.

The two MLCs of the party going to his residence to meet Akhilesh Yadav, Udayveer Singh and Rajpal Kashyap, were also stopped by the police on the road itself. Both the leaders showed their I-cards along with their introduction, yet they were stopped. MLC Rajpal Kashyap and Ashu Malik have been taken into custody by the police. Both were detained after being pushed by the police to go to the party office.

chhatarpur / Bhopal| A Dalit was allegedly beaten to death after touching food in the Chhatarpur district of Madhya Pradesh. Both the accused who carried...
Read more