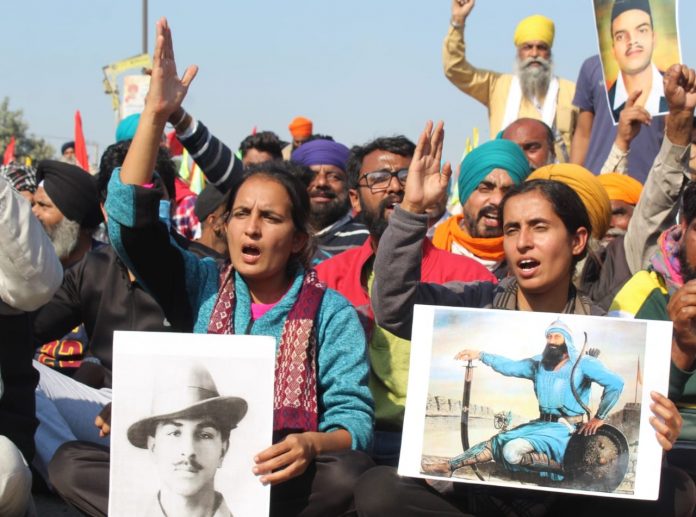 NEW DELHI| With the first light of the sun on Saturday at Singhu and Tikri borders of Delhi, the second day of farmers’ protests started loudly and welcomed the new dawn, chanting the ‘black law’.

Amid tight security arrangements, thousands of farmers are adamant about their demands and slogans on both the Singhu and Tikri borders demanding the withdrawal of the three agricultural laws of the central government.

At the same time, there was a strange view amidst the protest, in fact, the farmers themselves barricaded themselves to maintain peace and harmony, although the road blockage was causing trouble for the passengers passing through, because of these boundaries. Traffic was diverted on the various routes leading to it.

They are raising their voices in a united voice and are adamant on their demand. This movement has been planned for two months. They will not end their protest until the government agrees to their demands. He is demanding the repeal of agricultural laws passed in the monsoon session of Parliament.

A member of the Kisan Ekta group, which is protesting at the Tikari border, says that if their demands are not met, they can protest for six months.

The group from Fatehabad said, “We have food and other arrangements for the next six months. If our demands are not met, we can sit here easily for months.”

At the same time, the security forces are busy arranging the deployment as directed by senior officers. The march which started on Thursday from Punjab, Haryana and four states has entered the weekend, in such a situation, officers are instructing the security forces how to handle the situation.

The way has been jammed with concrete slabs, concertina wires, sand-loaded trucks, with the prospect of more farmers trying to reach the border and entering the national capital.

The administration finally offered Nirankari Samagam Maidan in Burari, North Delhi, in the evening, where farmer leaders staged demonstrations at the Singhu border on the Delhi-Chandigarh highway.

Some peasant leaders reached Burari Maidan late, while many stayed on the barricades.

A similar skirmish was witnessed throughout the day on the Tikri border for about 50 kilometers on Friday, where on one side there were water showers on the farmers and farmers tried to go to the national capital with their trucks and trackers.

According to the ground report, more than 300 tractors and several trucks still stand on the other side of both boundaries. However, portable toilets, water tankers, mobile dispensaries and langar services were provided to farmers at night.