Devious effort to stage/manage a firing incident, by concocting a false story, foiled by the police officials of ps sarai rohilla 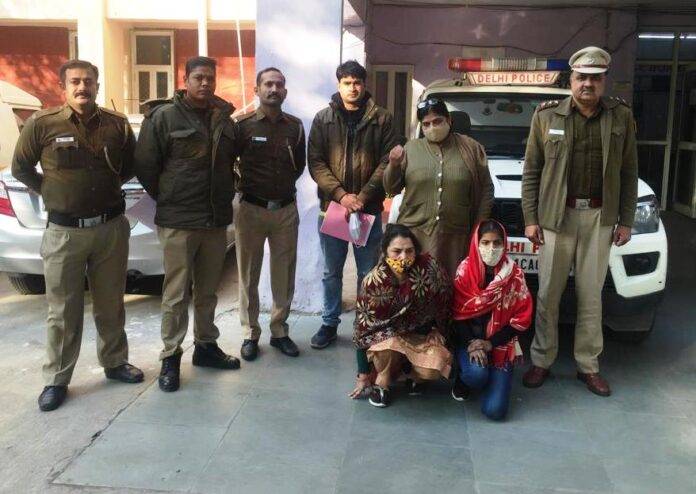 Delhi: The police officials of PS Sarai Rohilla have shown a rare example of professional aptitude, investigating skill and high grade of the presence of mind in foiling the attempt of stage-managing a firing incident, taken place at Than Singh Nagar, Anand Parbat, Delhi, while handling an illegal firearm.  The accused persons tried to manage the incident by distorting the facts and misleading the police but the prudent view of the police officials not only surfaced the true facts but also unearthed the conspiracy for false implication of an innocent person, taking the advantage of the firing incident.  The illegal firearm has been recovered at the instance of the so-called complainant and arrested the accused persons within a noticeable period of less than 24 hours.:

At around 01:00 AM, in the intervening night of 28/29.01.2022, information about the firing incident was received in PS Sarai Rohilla. The caller informed that two motorcycle-borne boys fired upon his mother at Sarai Rohilla Flyover and a small kid, who was with his mother, has sustained a gun-shot injury at his shoulder.  The injured boy along with his mother was brought to Jeevan Mala Hospital, Rohtak Road, Delhi and his mother is also with the injured child.

On receipt of the information, the local police officials reached Jeevan Mala Hospital, Rohtak Road, Delhi and found a 3 years old child under treatment.  The child had a gun-shot injury on his left shoulder joint region with massive bleeding.  Smt. Heera (changed name), stated that the 3 yrs old boy (injured victim) is the grandson of one of her real sisters and living with her. On 28.01.2022, she had gone to meet another sister residing in Shastri Nagar, Delhi and was intending to stay there overnight but her grandson (the victim) was feeling uneasy there. So, she decided to return back to her house at Than Singh Nagar, Delhi.

Around midnight at 12:00 AM, she reached the red light of Shastri Nagar but she didn’t get any conveyance. So, she proceeded to her residence on foot along with the 3 yrs old child.  When she reached Sarai Rohilla Flyover, two motorcycle-borne boys came and fired upon her and ran away.  Upon this, a child started crying and when she checked blood was oozing from the shoulder of the child.  She call her relatives and took the child to Jeevan Mala Hospital. Later, her son “B” made a mobile call to the police about the incident.

Smt Heera was confronted with her sister. Upon this, she started distorting her own version of facts. On sustained examination, she confessed that the bullet was fired by her daughter-in-law Fatima (name changed), 19 yrs, while she was trying to fire from the pistol available at her house. The fired bullet hit the child, who was playing nearby.  Her residence was checked and a blood-sheared bed-sheet was recovered from her house.

On enquiry about the pistol, she told that after the incident she threw the same on the Railway Track. The police team immediately searched the railway track and recovered the alleged Pistol at her instance.  The new facts stated by the complainants are being verified with technical help, whether the incident actually took place at the stated house or elsewhere.

During interrogation, Smt Heera (name changed) disclosed that to manage the firing incident and to take its advantage, she had hatched a conspiracy to falsely implicate some family member of accused ‘K’, who is running in JC in a case of PS Anand Parbat, Delhi registered on the complaint of the younger sister “X” (minor) of Fatima.  Smt Heera along with his two sons hatched the conspiracy to implicate the family members of accused in above said case. Her both sons are absconding.           Fatima is married to younger son “B” of Smt Heera and the younger sister “X” (a minor) of Fatima is also living with them.

It further disclosed that the illegal Pistol was brought to home by his sons “A” and “B”.