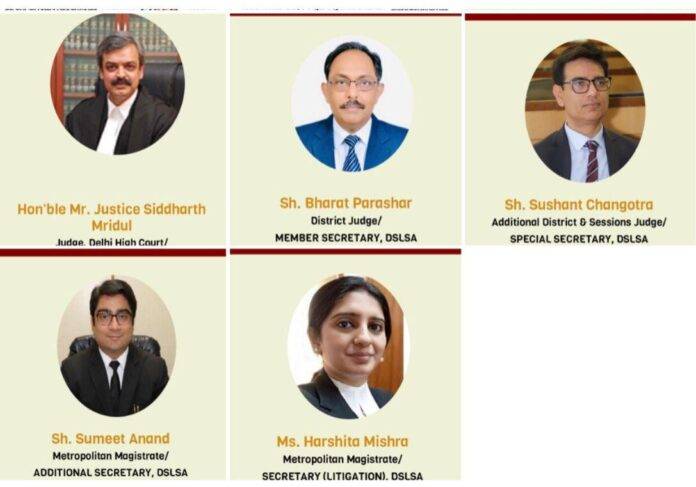 Lok Adalat is an effective means for amicable resolution of disputes in a cost effective and speedy manner.  DSLSA has been continuously organizing Lok Adalats benefiting lakhs of litigants and resulting in resolution of lakhs of cases throughout Delhi.

While organizing today’s Lok Adalats, DSLSA followed appropriate COVID behaviour and ensured that there is no overcrowding in any of the court complexes.  As per earlier practice and to avoid overcrowding in Traffic Courts, litigants were required to download and take print out of their challan slips from the dedicated weblink https://traffic.delhipolice.gov.in/ notice/lokadalat which was provided at the Portal of Delhi Traffic Police and on the website of our Authority. Litigants were provided the facility to choose Court Complex, Court Number, as well as Time Slot at the time of generation of their Challan Slips.  1,44,000 Lakh challans were downloaded by people.

Today’s Lok Adalat i.e. on 12.11.2022 was special not only for DSLSA, but also for the entire legal aid community as in order to further its commitment towards its motto Sewa Samadhan Samarpan, DSLSA took a small but significant plunge towards inclusivity by including 6 Transgenders, 3 Senior Citizens and 1 Acid Attack victim, in decision making process by deputing them as Associate Members in Lok Adalat Benches at different Court complexes, in addition to Advocates, Social Workers and other persons as Associate Members.

Shri Bharat Parashar, Member Secretary, DSLSA along with Special Secretary, Addl. Secretary, Secretary (Litigation) and other Secretaries of the Districts personally supervised working of the Lok Adalat Benches and took stock of other arrangements for the litigants.

Mr. Bharat Parashar, Ld. Member Secretary, DSLSA stated that the Authority is committed for providing Free & Competent Legal Aid to all sections of the society and especially to the vulnerable and marginalized sections of the society. He also emphasized that this Authority will not wait for the persons to reach out to it, but will make all efforts to ensure that it reaches out to the needy in timely & effectively manner.  He further informed that regular National Lok Adalats as well as Special Lok Adalats will be organized in Delhi in future also from time to time.

In the seven District Court Complexes, 317 Lok Adalat Benches were constituted to deal with all types of Civil and Criminal Compoundable cases. 1,45,323 (approx.) cases have been referred in the Lok Adalat. Out of all these 1,26,871 cases have been disposed of for a total settlement amount of Rs. 214.67 Crore.

Out of the aforesaid data, 547 cases of MACT were settled and settlement amount was Rs. 37.09  Crore.

It is further informed that one MACT case No.311/2018, titled “Sehnaz vs. Md. Rafia etc.” was settled in South DLSA, Saket Courts Complex, and the maximum compensation amount agreed to be paid by the Insurance Company is Rs. 85 lakh.

Lok Adalat benches were also constituted at District Consumer Forums where 111 cases were settled and settlement amount was Rs. 2.83 Crore.

Lok Adalat benches were also constituted at Debt Recovery Tribunals where 77 cases were settled and settlement amount was Rs. 454.59 Crore.

Lok Adalat bench for electricity matter was also constituted at Permanent Lok Adalat where 1193 cases were settled and settlement amount was Rs. 3.12 Crore.

In this National Lok Adalat, overall 330 Lok Adalat Benches were made up in which 1,28,301 cases were settled and settlement amount was Rs.677.65 Crore.

AAP workers reach out to every voter through digital media: Arvind Kejriwal