Election Commission: Elections will be held in 7 phases in 5 states, voting from February 10 to March 7, counting of votes on March 10 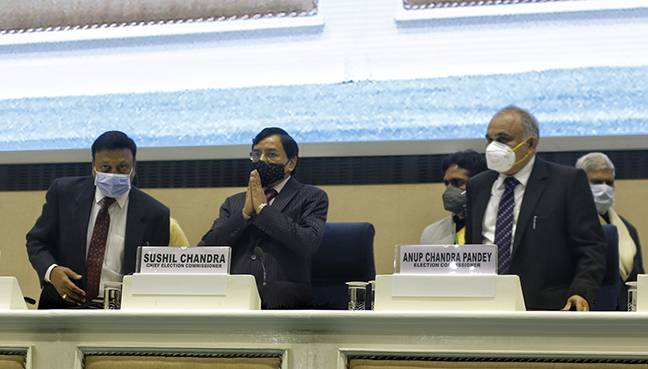 New Delhi| The upcoming assembly elections in Uttar Pradesh, Uttarakhand, Goa, Punjab and Manipur will be held in seven phases from February 10 to March 7. After this, the counting of votes will take place on March 10. The Election Commission made this announcement on Saturday.

The elections will be conducted with a complete covid protocol.

Keeping in view the pandemic situation, no physical rallies, roadshows, padayatra or vehicle rallies will be allowed till January 15. All parties have been advised to run the campaign in virtual mode.

Referring to Article 171(1), Chandra said the term of the Assembly is to end in five years and therefore elections are necessary.

As per the COVID protocol for conducting the elections, all election officials will be double vaccinated, given a booster dose and will also be treated as frontline workers. The booths will be fully sanitized and adequate gloves, sanitizers etc. will be available for the polling personnel.

Polling hours have been extended by one hour in all states.

The final voter list was published on January 5. There are total of 18.34 crore voters including service voters. Of these, 8.55 crore are women. The Election Commission has tried to increase the number of voters and as a result, Uttar Pradesh has seen an increase among all the states with the highest voter growth.

Chandra said at least one booth in each assembly constituency would be managed exclusively by women.

He said, now it will be mandatory to publish the criminal records of the candidates in local newspapers and television channels at least thrice. Even parties are expected to do the same to their candidates.

The preparations have been going on for at least six months with the Election Commission teams visiting the polled states.

Facebook
Twitter
Pinterest
WhatsApp
Previous articleElections will be held in 7 phases amid the Corona crisis, counting of votes will be done on March 10: Election Commission
Next articleIn view of the rising COVID-19 cases in Delhi, Kejriwal Government devices to increase 5,650 normal beds, 2075 ICUs in 14 hospitals along with 2800 beds in 8 COVID care centers – Satyendar Jain
Team Janmat Samachar