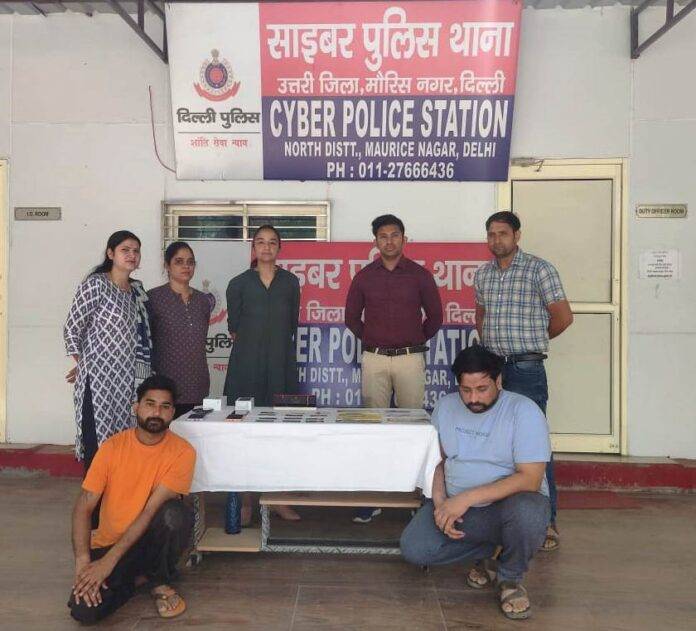 A complaint from Shri Ramesh Chandra, age-55 years, (Who is a professor in Delhi University) was received at Police Station Cyber North on 29.03.2022, alleging therein that he was intending to travel to Canada to attend an official programme in first week of April, 2022. On 23.03.2022, his student Ms XXXXX Singh made an enquiry on his behalf about travel tickets on Sulekha App and after some time she received multiple calls for bookings. She purportedly settled on a good deal with a fictitious agent named Pravin Tiwari who booked the tickets for KLM Airlines and sent copies on her whatsapp. Thereafter, as per agent’s instructions Rs 1,49,730/- were deposited in bank A/C. However, later on when he (complainant) cross checked the details of booked ticket through KLM airlines, he found that the tickets were cancelled. Efforts made to contact the agent were in vain as his phone was switched off.

During investigation it was also revealed that accused persons have cheated several other persons through same modus operandi and therefore the police team also contacted other victims to find other clues. After sustained efforts the team managed to locate the accused in CCTV footage in Gurugram, Haryana. Connecting several leads, the team finally zeroed in the location of accused persons in Zirakpur (Punjab) and raid was conducted at their hideouts at Zirakpur, but the accused persons had left the premises a day before the police team could reach there.

However the police team got a clue that marriage engagement ceremony (Sagai) of accused Pravin Tiwari was fixed on 14th April at Baharich (Uttar Pradesh). Immediately, running on the heels of accused persons, the police team rushed to Baharich, Uttar Pradesh, wherein both the accused persons were apprehended on 14.04.2022. Later, at their instance, 01 gold chain (weighing 05 gm.), 01 Pan-drive, 04 Smart mobile phones, 08 SIM Cards, 10 ATM Cards, 01 Bajaj Finance Card, 03 Cheque books and 01 Pass book have been recovered from the house of accused Pravin Tiwari.

After the arrest of both the accused persons Pravin Tiwari, age-34 years and Rohit Kumar @ Raj, age-34 years, they were interrogated thoroughly. It was disclosed that accused Pravin Tiwari met with co-accused Rohit Kumar @ Raj in Pune Maharastra during the year 2016 and both started working as travel agents. However, due to Corona pandemic they suffered losses and few months ago shifted to Zirakpur, Punjab and hatched a plan to cheat prospective passengers. Thereafter, the accused persons registered themselves as agents on Sulekha App through fictitious mobile numbers for getting leads on air tickets related enquiries. Upon getting such leads through Sulekha App, they would offer best deals to induce prospective flyers and after striking the deal they would send them copy of booked air-tickets through Whats App and would receive payments. After duping intending flyers, they used to cancel the tickets and switch off their phones.

Further investigation of the case is in progress and efforts are being made to link recover mobile phones and bank accounts with other victims.

BJP’s pressure on me to topple Maharashtra government: Sanjay Raut