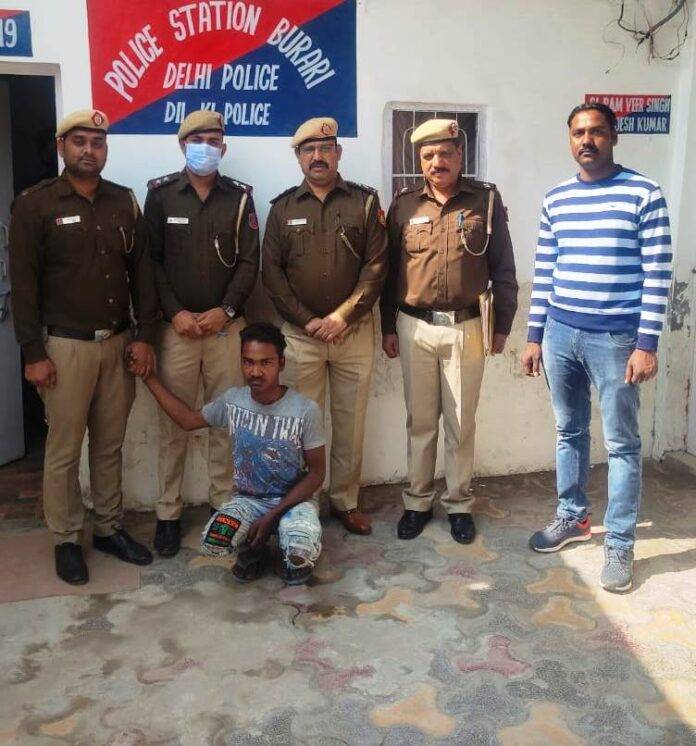 Delhi : Highway Patrolling Jaguar team of North District and SHO, PS Burari combine in a slick police response to nab a desperate snatcher after giving him a high voltage chase on Outer Ring Road of around 2 km. The Police team nabbed the snatcher red-handed, recovered the snatched mobile phone and seized the Scooty used in the crime.

On 15.2.2022 at around 04:00 PM, Inspr. Rajender Prashad, SHO/PS Burari was on the way back to Police Station from his official assignment after along and busy day, he saw two distraught young girls seeking help at the Burari Chowk on the roundabout on Outer Ring Road. The girls revealed that their mobile phone had been snatched by two Scooty borne snatchers.

Without wasting a second, the officer flashed a message to alert the Highway Jaguar Patrolling team on Outer Ring Road. The only clue was the last two digits of the Scooty smudged by mud.  The colour of the Scooty was also not clear as the evening sun made it difficult to focus on the vehicle.  Instantly, the officer himself decided to chase the snatchers in his official Scorpio vehicle.

In the meantime, he also received a message from Jaguar Highway Patrol Team that was available for exactly the job they were assigned, i.e. anti-snatching patrolling during peak traffic hours.  Ct Sandeep of Jaguar team contacted SHO’s operator Ct Surender about chasing the culprits. Without wasting any time the operator alerted SI Deepak to block the exits ahead.

Other members of the Jaguar patrol team zeroed in from different directions. Ct Sandeep and Ct Anoop with the help of SHO/PS Burari blocked the road for the snatchers from behind.

Seeing them cornered near Mukandpur Flyover, they abandoned the vehicle and tried to run away jumping into the nullah and make good their escape using the advantage of the thick bushes close to the nullah. The Jaguar team members gave them a chase on foot and SI Deepak Sharma also joined the same.

After a brief but swift chase, one of the accused Allaudin @ Kalia, 19 yrs was apprehended with the snatched mobile phone, however his associate managed to escape.  In the meantime, the shaken but brave girls also reached the spot. The Scooty used in the crime has been taken in possession as case property.

The phone has been returned to the victim girl, as she used the same for studies.  She was extremely satisfied with the police action and quick response in a movie like action against the criminals.  The girls were also thankful to the SHO, PS Burari for offering them food in his vehicle, when they were being taken to the PS for legal work.  The girl students regained composure after the traumatic experience and requested anonymity for security reasons.

During interrogation, criminal Allaudin @Kalia, 19 yrs disclosed about his associate detail and raids were conducted at his hide outs but he is absconding and evading his arrest.

Modus Operandi: He further disclosed the modus operandi which is unique in many ways.  They avoid using mobile phones and used to smudge the registration plate of the scooty, so that the CCTV cameras or the witnesses would not able to pick the number for them to be caught later on. One of the accused scanned the area for victims and they chose to target the girl, who has held the mobile phone away from the face and were on the speaker mode.  The criminals then slowly zeroed in on the victim without raising suspicion and then in a jiffy snatched the phone and flee away.

Further investigation is in progress to nab his associate and identifying the vehicle owner is also being established for suitable action against him for providing the vehicle for crime.

Demand for the resignation of CM Kejriwal in BJP executive meeting