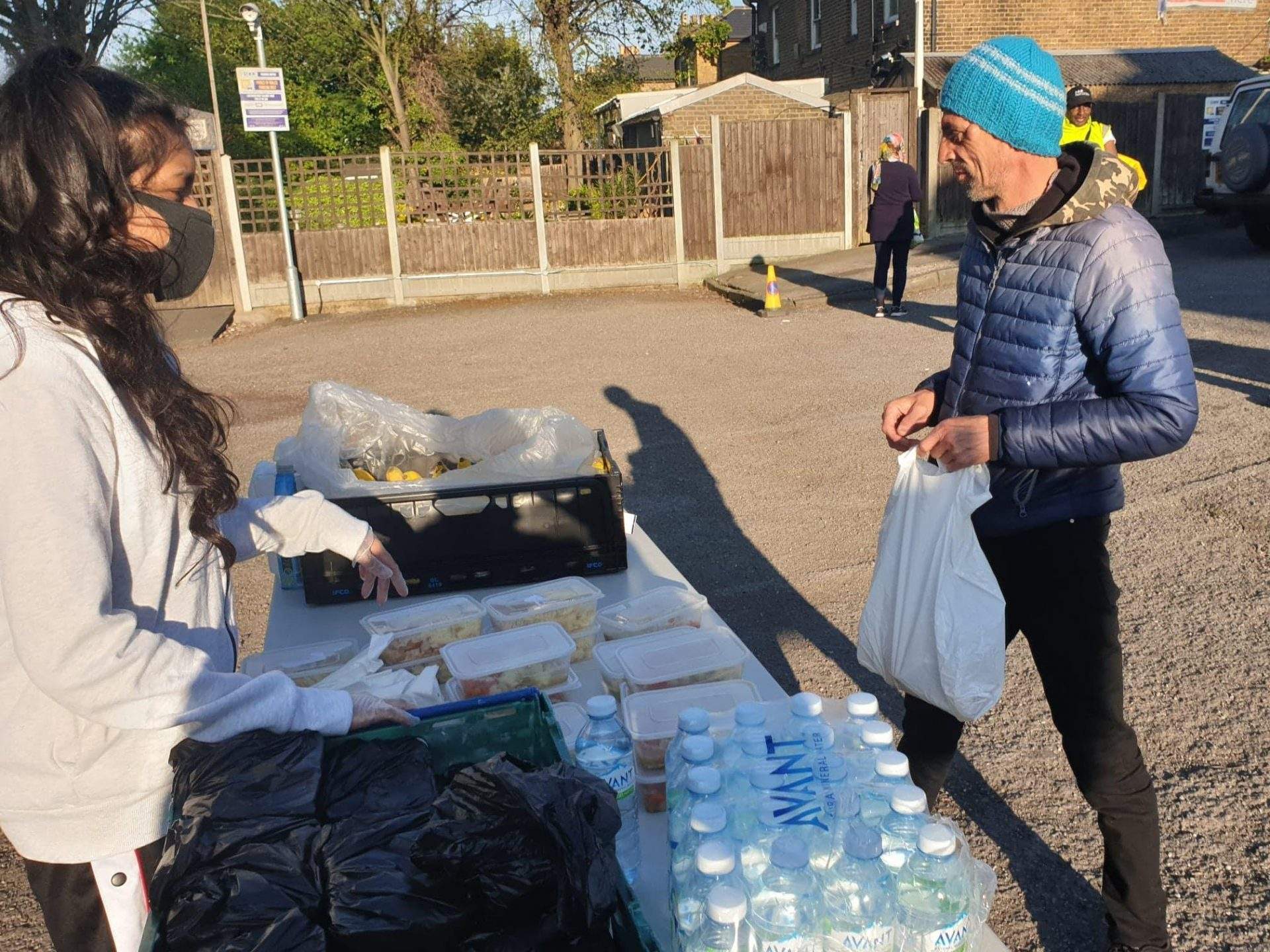 16-year-old Hannah Chowdhry cares passionately about making a difference to her community and during the Coronavirus Pandemic, she is on the frontline helping at a daily project to feed the homeless and vulnerable in Ilford, East London as the youngest volunteer for the British Asian Christian Association.

Hannah started volunteering at the Association’s food bank and “Meals for the homeless” project in January 2020, which included cooking meals for the rough sleepers, putting herself through a risk assessment level 2, Safeguarding Level 2, Mental Health Level 2 and Food Safety Level 2 course. Hannah is currently completing a Fire Awareness Level 2 and COSHH Level 2 course as a gap-filler for the GCSE’s she no longer has to revise for.

She has built up a strong bond with many of the rough sleepers, including Dee, a 9 year army veteran who lost the bone from the knee to ankle in her left leg after her friend was blown to pieces after walking on an IED in Afghanistan. Only 6 months later Dee was shot in the back by a bullet that passed through and killed another friend, which left her immobile for 18 months and told she would never walk again. Dee who has been living on the streets for five years, said:

You can donate towards the BACA homeless project which will continue after the COVID-19 Pandemic is over. Currently we are feeding up to 65 people every day and have we have helped 17 former rough sleepers into temporary accommodation, some of which are now in permanent homes. To donate you simply have to (click here) where a range of options are available to you. Thank You for your support.

At secondary school, Hannah became aware that some pupils were using legal-highs, so she started a campaign which led to the creation of a borough-wide reporting portal to help map drug-related crime.

Hannah is also a long-term campaigner against knife crime and now sits on a youth reference panel for the Mayor of London’s Office for Policing and Crime.

Hannah’s work against knife crime led to an invite from Redbridge faith Forum for Hannah to share a prayer at Redbridge Peace Monument which BACA installed in Ilford in 2011.

Concerned by the number of knife crimes as well as cuts to youth services, Hannah raised the funds to open a non-alcoholic “chill out lounge” for teenagers at Clementswood Community Centre in a deprived area of the borough of Redbridge to give young people a place to hang out in Ilford.
She is both an Essex and a Redbridge Youth Councillor.

Redbridge Rotary were so impressed by Hannah’s community work that they nominated her for a Rotary Young Citizen Award.

Hannah said: “As a passionate anti-knife crime advocate, I am extremely concerned about the rising level of violent crime we are seeing on the streets of London and Essex.”

She added: “I know that just tackling drugs and eradicating gangs will not solve this problem. We need to change the deeply embedded attitudes and behaviour towards knife violence and introduce peace initiatives, mental health programmes and redress violence in a proactive manner.

“Positive social outlets for teenagers may help to curtail violence as there seems to be a relationship between knife crime and boredom, loneliness and social fragmentation.”

At 13, Hannah had already become the youngest volunteer and campaigner for British Asian Christian Association, and campaigns against the persecution of religious minorities in Pakistan. Her efforts have seen her invited to the European Parliament to meet with MEP’s and attend a seminar on Pakistan.

In 2017, Hannah raised awareness of the plight of Pak-Christians to more than a thousand people who were gathered before the steps of Westminster Cathedral and gave a similar talk at Notre Dame University in 2018. Through a translator she has been comforting young victims of persecution and during the COVID-19 Lockdown has begun Urdu classes to improve this aspect of her volunteering. Hannah continues to write and edit articles for the BACA blog.

Although Hannah suffers from Reflex Sympathetic Dystrophy (a disorder that causes lasting pain, usually in an arm or leg) and Juvenile Arthritis, she is determined that her physical condition does not deter her from helping her community wherever she can.

Aged just seven, Hannah started a campaign which led to the installation of a £50,000 mammoth skull replica in Redbridge Museum which had been at the Natural History Museum in London, this piece of history restored to its original location was Hannah’s first community campaign.
The 200,000-year-old fossil, from which this exact replica was created, was discovered in Ilford in 1864.

“I know that Rotarians are doing their hard work to defeat polio around the world. And then for them to notice me doing my work for the community makes me feel special.

“So I’d like to thank them for giving me this Award.”

Hannah will receive a trophy, certificate and £300 to go towards her chosen project or charity from Rotary in Britain and Ireland.
The Rotary Young Citizen Awards Presentation had been due to take place at the UK’s first-ever Volunteer Expo, organised by Rotary International in Great Britain and Ireland at the NEC in Birmingham this month but the event has been postponed until May 2021 due to the Coronavirus Pandemic.

The President of Rotary International in Great Britain and Ireland Donna Wallbank said:

“Hannah Chowdhry has an obvious passionate heart to make a difference for and with her community, her inclusion of all within that community shows that she, with others like her, leaves our communities with hope, utilising her faith and respecting others whilst developing charitable and campaigning deeds in her daily life leads me to believe that one person can make a difference to many.”

The Rotary Young Citizen Awards were started in 2007 to celebrate the amazing achievements of inspirational young people across Great Britain and Ireland, many of whom have assumed important responsibilities at a very young age.

There are over 1,700 clubs in Great Britain and Ireland with about 45,000 members. Rotary is open to anyone over the age of 18 who wants to give back to their community, meet new people and have fun.

Rotary International was founded in 1905 in Chicago and is now the world’s largest international service organisation with 1.2 million professional men and women as members. There are 35,000 clubs in over 200 countries and geographical regions.

PARIS | There have been 49,215 new cases of corona infection on the first day of national lockdown to prevent a second wave of coronavirus epidemic...
Read more