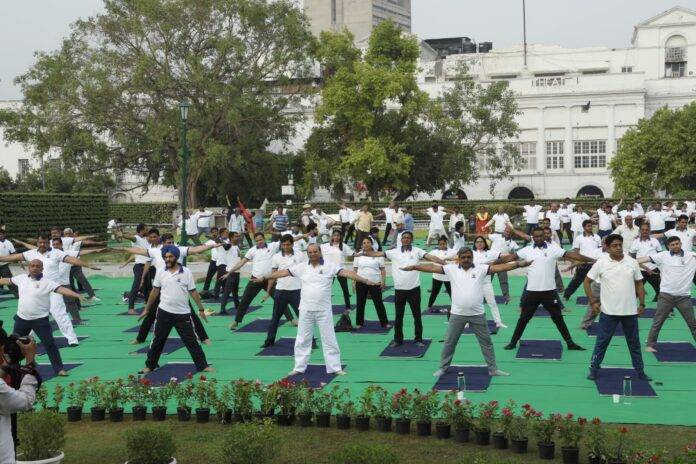 New Delhi : As a part of celebration of 75 years of India’s Independence as “Azaadi ka Amrit Mahotsav”, New Delhi Municipal Council (NDMC) observed the International Day of Yoga at 75 locations including its 45 Schools and 30 other locations like Parks, Gardens, Working Women Hostels, RWAs/MTAs area. Around 20,000 participants performed common protocol of yoga on the occasion.

NDMC collaborated with Gayatri Pariwar at Talkatora Garden, Patanjali at Lodhi Garden and Art of Living at Nehru Park for yoga day performance.

NDMC’s Atal Adarsh Vidyalays and Navyug Schools students and teachers also participated in Yoga Event organized in their respective schools in which students of all age group and classes performed yoga under the guidance of yoga teachers and instructors of partner yoga institution. NDMC arranged the live telecast of Hon’ble Prime Minister’s speech from Mysuru, Karnataka on LED screens at five venues.

In order to facilitate participation in the celebration of International Day of yoga and make the program successful, NDMC made necessary arrangements of civic and basic amenities including potable water, mobile toilets, ambulance and first-aid desk along with providing Yoga mat and T-shirts. NDMC deployed around 3000 manpower under the supervision of around 100 nodal officers at all locations.

NDMC had also rope up the event since 14th June by organizing Yoga Build camps at Nehru Park, Talkatora Garden and Lodhi Garden in association with partner yoga institutions. These Build up camps were also organized in the NDMC Schools from 18th June to 20th June for successful organization of International Day of Yoga 2022.

New Delhi: With the aim to successful organization of the prestigious International Day of Yoga on 21st June, 2022 at 75 locations in New Delhi...
Read more
Delhi