Home National Delhi NDMC entered into an agreement with Leuven City of Belgium on the establishment of...
NationalDelhi 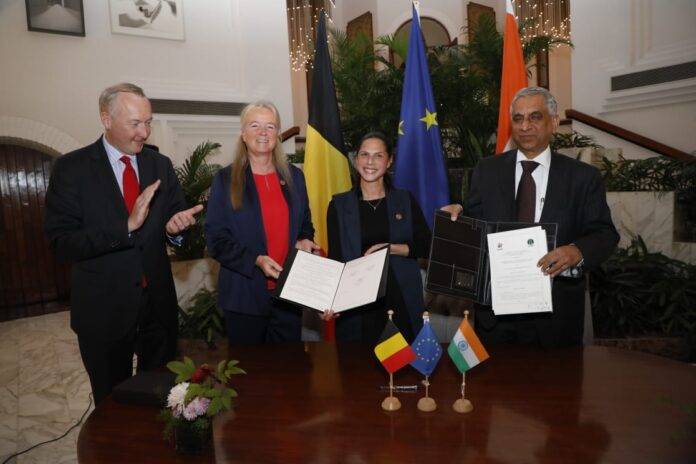 New Delhi: New Delhi Municipal Council (NDMC) and Leuven City of the Kingdom of Belgium have entered into an agreement on the establishment of Economic and Cultural Cooperation and Exchange of Expertise at Resident of Ambassador of Belgium to India, Chanakyapuri, New Delhi today.

On behalf of NDMC, Chairperson – Shri Amit Yadav and on behalf of Leuven City, Deputy Mayor – Mrs. Lalynn Wadera signed the agreement in the presence of Ambassador of Belgium – H.E. Mr. Didier Vanderhasselt and other senior officers of NDMC.

The agreement between the NDMC and Leuven City will exchange the expertise and cooperation in the field of Smart  City, e-Government transportation, tourism and MICE Industry, Climate Change and Environment, Service Delivery, Civic Administration, Education, Horticulture, Sports, Waste-Water and Solid Waste Management, Infrastructure, Public Health, Science and Technology, Heritage Management, Urban Renewal, Urban and Regional Planning and related matter to support shared prosperity and development of both cities.  The agreement shall remain in force for three years.

A delegation of Leuven City led by Deputy Mayor Economic City of Leuven visited the NDMC Headquarter, Palika Kendra and interacted with the Chairman, NDMC and other senior officers. A presentation of the Smart City Initiatives was presented before the delegation by Director (IT)/ Smart City of NDMC. On the other hand, a presentation on Leuven City was made by CEO, Leuven Mindgate.

The Leuven City delegation also visited the Integrated Command and Control Centre at Palika Kendra and interacted with the concerned officers on its functions and operations for the delivery of Civic Service in New Delhi area. Following the Palika Kendra, the delegates also visited the Nehru Park, Chanakyapuri, New Delhi.

NDMC Budget for FY 2023-24 shows a significant increase in receipts and expenditure at similar levels for the premier municipal organization in Delhi.

New Delhi: NDMC is confident of ending the year with a net surplus, in league with the previous years. NDMC presented a forward-looking budget with...
Read more

02 gambllers nabbed by the team of special staff, north district, while they were betting online on ipl match i.e. Delhi capital vs royal...