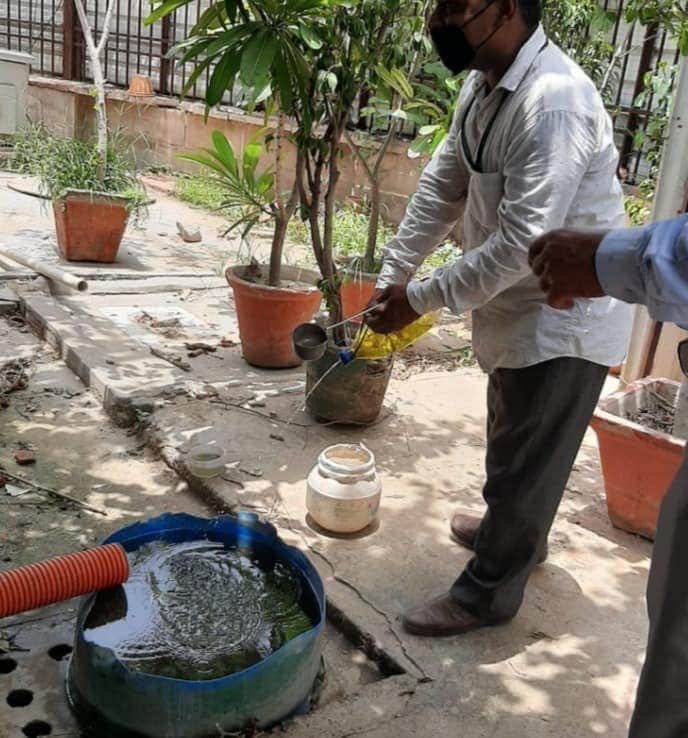 Under the Anti Larval Action 310313 houses Visited and 567408 containers checked in NDMC area.

During the drive as many as 310313 houses / premises have been visited and 567408 water containers have been checked out of which 1541 were found positive for larva breeding. As per the certain provisions of the NDMC Act 1994 , as many as 1498 notices and 43 challan have been issued till this week end .

Upto July this year, number of Dengue and Chikungunya cases has been remarkably reduced compare to the last year due to the comprehensive efforts of the health department of NDMC, till date only one case of dengue and one case of chikungunya has reported in NDMC area.

NDMC health department has directed to its cross checking team for the purpose of anti larval action to check the all vector borne diseases sensitive premises and locations. NDMC field workers are continuosly visiting the area premises to find out collection of water at the construction sites and other sensetive places.

NDMC health department team members are also focusing on the presence of overhead tanks which are without covers, rooftop waterlogging containers and open space area of rain water collection.

NDMC has issued advisory letters to Presidents and Secretaries of Residents Welfare Associations (RWAs), Markets Trader’s Associations (MTAs), SHO of Police Stations and the Executive Engineers of CPWD for carrying out the all efforts to not allow mosquito breeding in their jurisdiction area.

This year due to covid19 pandemic, instead of interactive sessions for schools students, RWAs, MTAs or other public activities for awareness, NDMC is focussing on SMS messages, calling on mobile phones, video conferencing etc.

NDMC is issuing 50000 SMS every week to residents regarding actions to be taken from their side to contain spread of mosquito breeding in their locality.

New Delhi| Delhi Police has registered an FIR in the Mundka fire case. 27 people have died in this incident. A government official gave this information. Giving information,...
Read more
Delhi

Mundka fire: Many people missing, and bodies are not being identified

New Delhi | The Mundka fire has stunned the whole of Delhi. 15 hours have passed since the incident of fire in the building, but still, some...
Read more