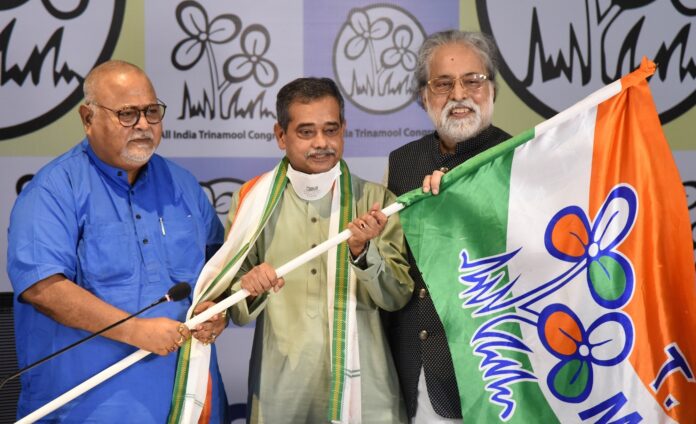 Kolkata| In a major setback to the Congress party, former President of India Pranab Mukherjee’s son Abhijit Mukherjee joined the Trinamool Congress on Monday afternoon. Mukherjee, a two-time MP from Jangipur in Murshidabad and a one-time MLA from Nanahati in Birbhum, said he would work as per the wishes of the party. Receiving the party’s flag from two Trinamool stalwarts Partha Chatterjee and Sudip Bandyopadhyay, Mukherjee said, “In 2011, I quit the government job and joined politics because I wanted to work for the people. Though I joined Congress. I fought the election on ticket, but I could easily win because of Mamata Banerjee’s fight against the Left Front.”

He said, “Now that BJP’s aggression is felt all over the country, it was only Mamata Banerjee who could fight against him and defeat him alone. I believe she is the only leader of the country who is of BJP. All can respond to aggression. I am proud that they have allowed me to join the party.”

When asked about the timing of joining the party, the former Nalhati MLA said, “If I had joined before the elections, everyone would have said that I want to be an MLA. I wanted to be a part of Trinamool Congress. I have not joined the party for the post. I have joined as the primary member of the party and I will work because the party wants me to work.”

Trinamool general secretary Partha Chatterjee while talking to the media said, “Abhijit Mukherjee comes from a political family and his father Pranab Mukherjee was not only our mentor but he was one of the most respected politicians around the world. He always helped with his We were helped. Valuable suggestions and advice. Now Trinamool Congress wants to use that experience of Abhijit Mukherjee and want to prosper.”

When asked about Mukherjee leaving Congress, state Congress president Adhir Ranjan Chowdhury said, “He is a great politician and son of Pranab Mukherjee. I have nothing to say about him. Why did he leave Congress, you have to ask him. Wanted, not me. He resigned from all Congress posts. But he never spoke to me, so I can’t explain why he left Congress.

VIDEO: 83-year-old elderly man falls into well in the circle to save the cat…