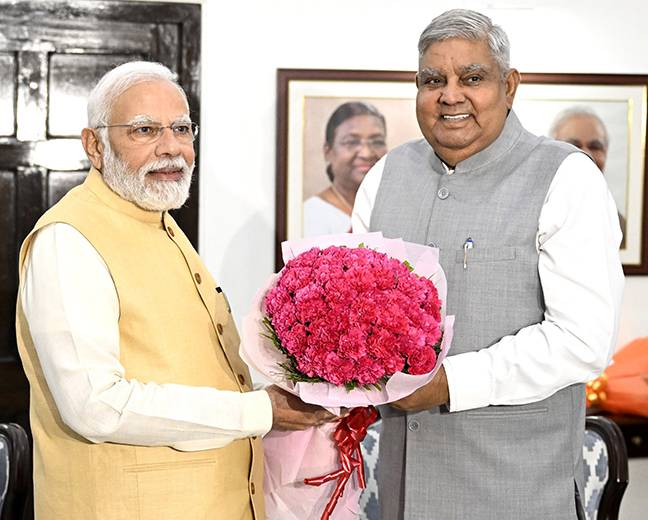 New Delhi| Prime Minister Narendra Modi on Saturday met Jagdeep Dhankhar and congratulated him on being elected as the new Vice President of the country.

In a tweet, the Prime Minister said, “Congratulations to Jagdeep Dhankhar on being elected Vice President with the support of all parties. I am sure he will be an outstanding Vice President. Our nation will gain a lot from his wisdom.”

He tweeted, “I thank all the MPs who voted for Jagdeep Dhankhar. At a time when India is celebrating the Amrit Mahotsav of Independence, we are proud to be the Vice President of Kisan Putra, who has excellent legal knowledge and skills. intellectual skill.”

He wrote on Twitter, “Congratulations Jagdeep Dhankhar on being elected the Vice President of India. Your long and rich experience in public life will benefit the nation. My best wishes for a productive and successful tenure.”

Defense Minister Rajnath said, “Congratulations Jagdeep Dhankhar on winning the Vice Presidential election. His long public life, wide experience and deep understanding of people’s issues will surely benefit the nation. I am sure he is an exceptional VP and Chairman of Rajya Sabha. Will be.”

UPA MLAs expressed solidarity with Hemant Soren, saying – we are in touch in any situation