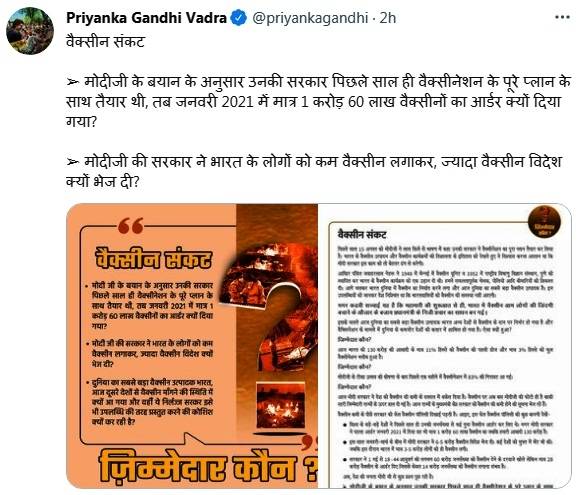 He said that these are the questions that the people of India are asking the government.

He said, “Last year the Prime Minister told the ramparts of the Red Fort on Independence Day that India is ready with the vaccination plan. Initially, the earlier success of vaccines created the impression that this would be done well. As Pandit Jawaharlal Nehru established the vaccine unit in Chennai in 1948 and paved the way for vaccination programs in the country. India has been successful in vaccinations and smallpox against polio. ”

” But the bitter truth is that what was expected, a smooth program became a tool of publicity for the Prime Minister and after being the largest producer, India has become an importer for a population of 130 crores. Only 11 percent Have received both the first dose and the 3 percent dose. ”

When all countries were ordering vaccines, the PM did not make room for us and even exported 6.5 crore vaccines.

Priyanka Gandhi had announced on Tuesday that she would start the ‘Who’s Who series on the issue of the epidemic. He has asked for feedback and suggestions from people.

In his Facebook post, he said that during the second wave of the epidemic, when the country was devastated and people were struggling for drugs, beds and oxygen, the government was in silent mode.

New Delhi | The World Health Organization (WHO) has issued a warning about the very serious consequences of the new variant of Covid-19, Omicron. The WHO...
Read more
Automobile