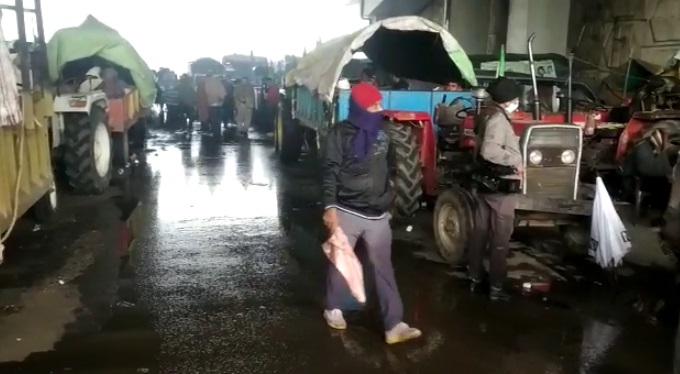 Women, children and elderly farmers sitting on the borders had to bear the brunt of the rain. The rain on the farmers’ systems destroyed the water. While the farmer was preparing how to avoid the rain on one side, he also struggled to save the food items on the border.

Rakesh Tikait, the national spokesperson of the Bharatiya Kisan Union, stating the conditions of the morning rains on the Ghazipur border and the status of the farmers, said, as the rainwater falls down on the mountains, the situation here remains the same. Farmers’ tents are installed here. Farmers have been living here for the last one month.

I would like to appeal to the peasant brothers that whatever farmers come to Ghazipur border, they should bring polythene, tripal and other things on their tractor.

However, when the rain stopped, the anchor service started again. On the one hand some protesting farmers are looking for ways to avoid the rain, while some farmers are engaged in the service of other farmer brothers.

The protesting farmer told that it is the will of the divine and the farmer Annadata and the divine are the two powers. The Annadata who worked in the fields is on the road. The government should immediately withdraw the laws and wish farmers good luck on the new year.

However, young farmers who have been waterlogged are draining them and draining mud from the wipers on the roads.

New Delhi| The demand for oxygen in Delhi is 976 metric tonnes but during the last 24 hours, only 577 metric tonnes of oxygen was...
Read more
Corona

New Delhi| A few days after the Delhi government set up a vaccination center in the Rajendra Nagar area of ​​the national capital with a...
Read more