Home National Noida Rahul, who was going to Hathras to meet the family of the...
NationalNoidaTop Stories

Rahul, who was going to Hathras to meet the family of the rape victim, was released after the arrest 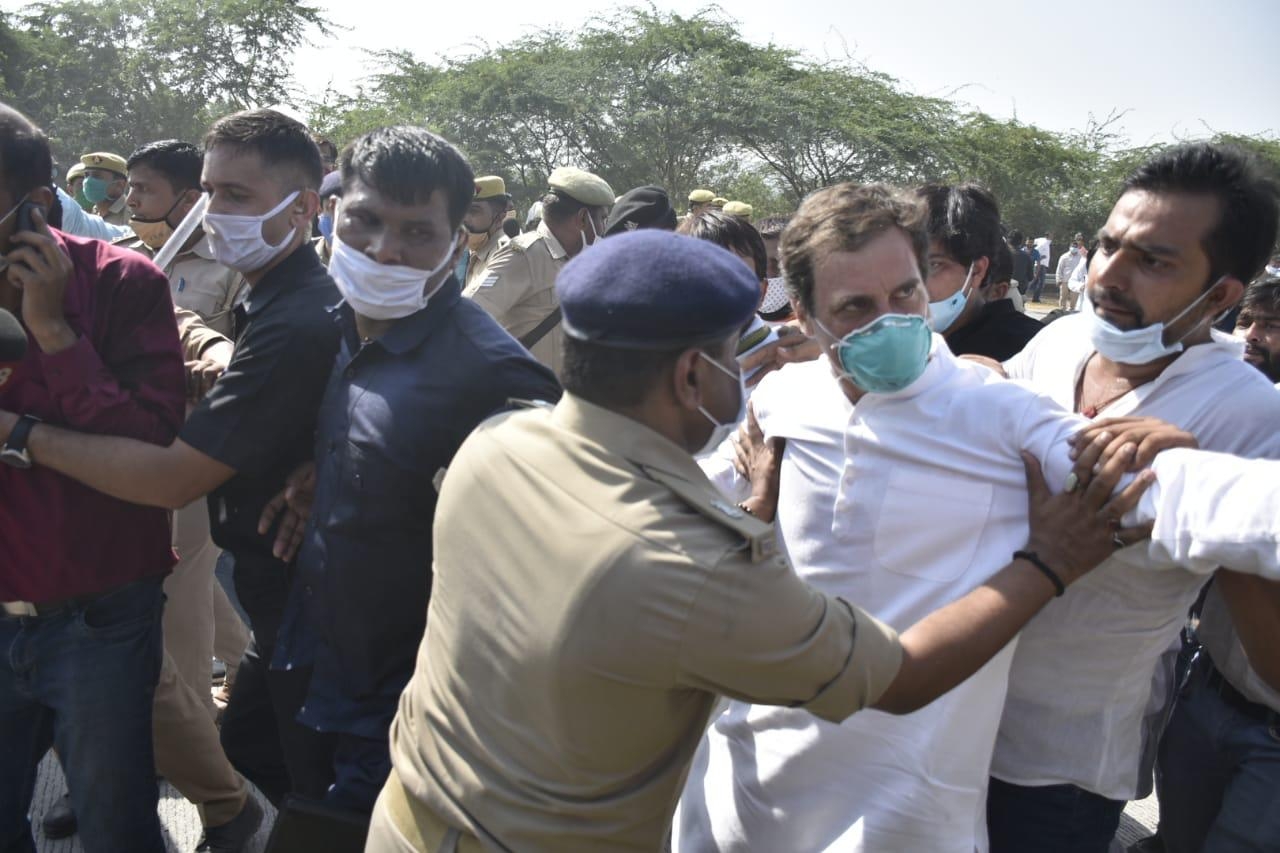 GREATER NOIDA| Congress leader Rahul Gandhi, who was going to Hathras on Thursday to meet the family of the rape victim, was arrested by the police on the Yamuna Expressway, after which he has now been released. While stopping Rahul on the highway, Rahul Gandhi fell on the ground in a slight shock with the police. Rahul Gandhi along with his sister Priyanka Gandhi Vadra and other leaders left for Hathras on Thursday morning. But as soon as they reached the Yamuna Expressway, their vehicles were stopped by Pusil.

It can be clearly seen in the video found from the scene that the police pushed Rahul Gandhi and Priyanka Gandhi, causing Rahul Gandhi to fall on the ground.

Later Rahul Gandhi told the media, “The police just pushed me, lathi-charged me and threw me to the ground. I want to ask, can only (Narendra) Modiji walk in this country? No normal person can walk? Our vehicle stopped, then we started walking. ”

The Uttar Pradesh police told Rahul Gandhi that he was being arrested, as he was marching in an area where Section 144 has been imposed.

Rahul Gandhi said that even if Section 144 was imposed, he would go to Hathras alone to meet the family of the rape victim. After that there was a fierce debate between the police and Congress leaders.

Rahul Gandhi attacked the Chief Minister of the state Yogi Adityanath after the police stopped him. In a tweet, Rahul alleged that it is Jungleraj’s condition in the state that meeting a family in mourning also scares the government.

He tweeted, “Chief Minister Yogi Adityanath, people are not left alone in their hour of grief. Jungleraj’s alam in UP is that meeting a family in mourning also scares the government. Don’t be so scared, Chief Minister!

Apart from this, Priyanka also tweeted and targeted the Uttar Pradesh government and the police. He said in the tweet, “Prevented us from going to Hathras. We all stopped with Rahul ji, we were repeatedly stopped, barbarously fired. Many activists are injured. But our intentions are sure. Can not. I wish this lathis, this police would have stood in defense of Hathras’ dalit daughter. ”

Additional DCP Gautam Buddha Nagar, Rannvijay Singh said that Rahul Gandhi has been arrested and he will not be allowed to go further as the police has a letter from DM Hathras stating that if Rahul Gandhi goes there, then this law Can break.

Earlier on Thursday morning, DND in Delhi was rumored that they would not be allowed to cross the DND border. But, Rahul Gandhi, Priyanka Gandhi and other Congress leaders crossed the DND border and left for Hathras.

Rahul Gandhi was arrested as soon as he passed on the Yamuna Expressway ahead of DND.