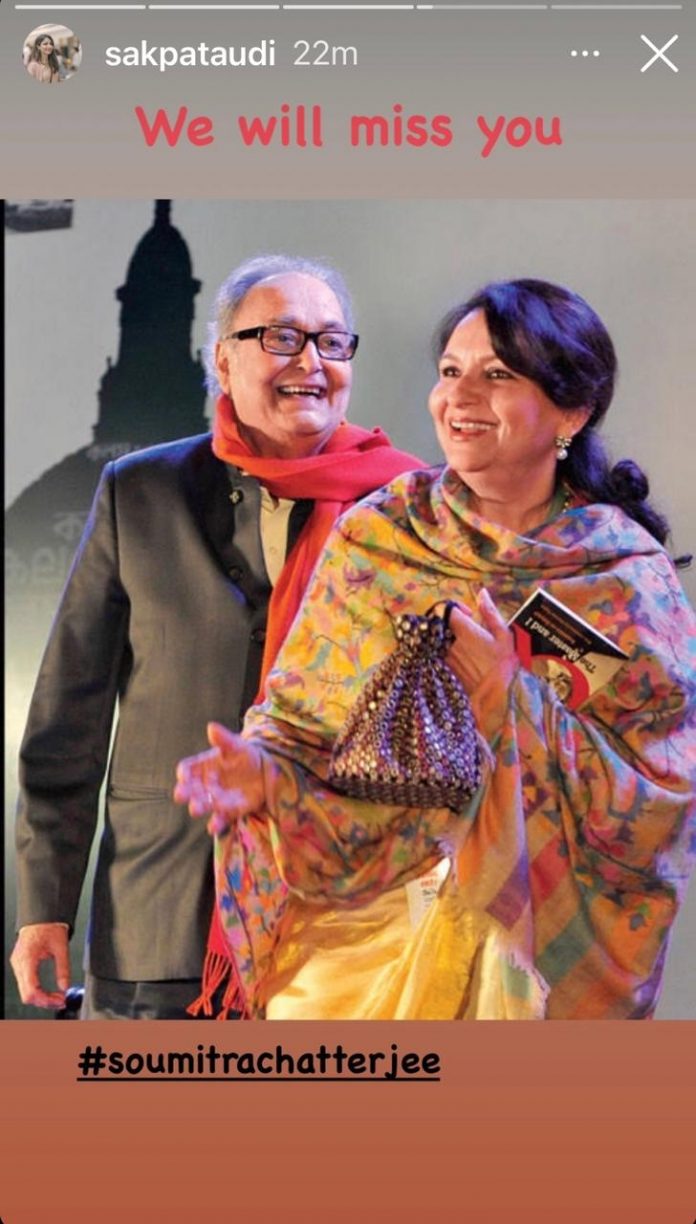 MUMBAI| Many celebrities from the Indian film fraternity paid homage to senior Bengali cinema actor Soumitra Chatterjee. He died on Sunday at the age of 85. The demise of the Dadasaheb Phalke winning actor was confirmed by a bulletin from Belle View Hospital in Kolkata.

The hospital bulletin said, “We announce with great heart that Mr. Soumitra Chatterjee breathed his last at 12.15 pm today (15 November 2020) at Belle View Clinic. We pay tribute to him.”

Shortly after his death, celebrities of the cinema expressed grief on social media.

He wrote on Twitter, “Sad loss, may your soul rest in peace. Your contribution to Indian cinema will always be remembered and generations to come will be inspired.”

Actress Soha Ali Khan posted two pictures of the late veteran along with her mother Sharmila Tagore on her Instagram Stories. Chatterjee and Sharmila Tagore worked together in films like ‘Opu Sansar’, ‘Araner Din Raat’, ‘Devi’ and ‘Barnali’.

Soha wrote, “We will miss you.”

Actress Tilottama Shome wrote, ” Bye. Soumitra da. 61 years of cinema. Thank you for your gift. Deepest condolences to your family. Always grateful for the moment. ”

Filmmaker Onir said in a tweet, “The end of an era for Bengali cinema. There are so many performances from this amazing cast that have enriched our lives for decades. World cinema will remember this beloved human being for all eternity.

Actor Rahul Bose Stated, “It was a real experience working with him at 15 Park Avenue. He answered all my questions about how he acted with generosity and warmth with Satyajit Ray. It has been a privilege, Soumitra da. May your soul rest in peace. ”

Filmmaker Madhur Bhandarkar wrote,” Sad to know about the death of Padma Bhushan Award winner Soumitra Chatterjee, will always remember my conversation with the soft-spoken actor during the 54th National Awards ceremony for the film Traffic Signal , He was very encouraging and inspiring. My condolences to his family and fans. ”

Actress Payal Ghosh wrote, “The end of an iconic era. The Bengali film industry today lost one of its greatest living legends. His soul found peace. Rest in Peace.”

Pankaj Berry who is known for his character Tathacharya in the serial Tenalirama will be seen in a different role in the Hindi film...
Read more
Entertainment

MUMBAI | The Bombay High Court on Tuesday granted interim relief to the two from major action in connection with the FIR lodged against them on...
Read more
Entertainment

Recently, makers of movie Bhonsle announced its nationwide release on the OTT platform Sony Liv. The film will be released on 26th June 2020...
Read more