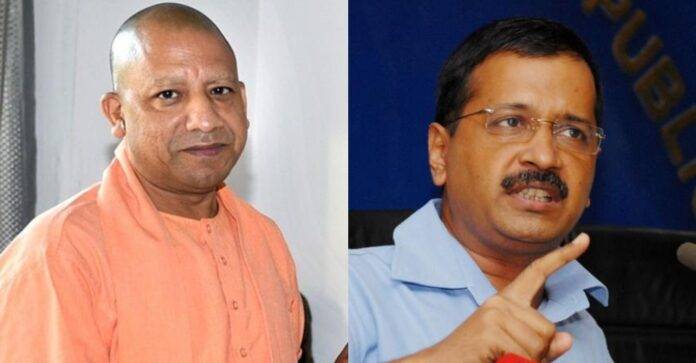 New Delhi | Responding to the discussion on the Motion of Thanks on the President’s address, Prime Minister Narendra Modi on Monday forced people to migrate to their respective states from Mumbai and Delhi amid the first wave of Corona on the Thackeray government of Maharashtra and the Kejriwal government of Delhi. And accused of motivating. Prime Minister Modi had said that due to the Kejriwal government, the number of corona infected increased rapidly in Uttar Pradesh, Uttarakhand and Punjab.

After this allegation by Prime Minister Modi, a ‘Twitter war’ broke out between Delhi Chief Minister Arvind Kejriwal and Uttar Pradesh Chief Minister Yogi Adityanath. Both the Chief Ministers were seen fiercely targeting each other politically.

Describing Kejriwal’s statement as condemnable, he tweeted and said, “Today’s statement about the respected Prime Minister of Arvind Kejriwal is highly condemnable. Arvind Kejriwal should apologize to the entire nation. Goswami Tulsidas ji only spoke about people like him. It is said that… to take a lie, to give a lie. To eat a lie, to chew a lie.”

After this, in a series of tweets, Yogi Adityanath targeted the Kejriwal government and said, “Listen, Kejriwal, when the whole humanity was moaning due to the pain of Corona, at that time you forced the workers of UP to leave Delhi. Even small children and women Your government did an undemocratic and inhuman act like leaving UP helpless in the middle of the night. Call you anti-human or…”

Yogi said in his next tweet, “Kejriwal has mastered in telling lies. Under the leadership of Ji, when he was battling a global epidemic like Corona, Kejriwal showed the migrant laborers the way out of Delhi.

Yogi further said, “The electricity-water connection was cut and the sleeping people were picked up and sent to the UP border by buses. An announcement was made that buses are going for Anand Vihar, beyond that for UP-Bihar. Buses will be available. The UP government arranged buses for the migrant laborers and brought them back safely.”

Responding to the flurry of allegations being leveled one after the other by Yogi Adityanath, Arvind Kejriwal tweeted and said, “Listen Yogi, you should be there. Just like the bodies of the people of UP were flowing in the river and you were giving advertisements of your false applause in Times magazine by spending crores of rupees. I have never seen a cruel and cruel ruler like you.”

In Uttar Pradesh, Uttarakhand and Punjab, there is a political ruckus in the assembly elections. Aam Aadmi Party is contesting elections in these three states and hence AAP chief Arvind Kejriwal himself came forward to answer the allegations leveled by Prime Minister Modi on the floor of Lok Sabha and in view of this election season, BJP has come forward to retaliate. Uttar Pradesh Chief Minister Yogi Adityanath was seen taking the responsibility.

Facebook
Twitter
Pinterest
WhatsApp
Previous articleVery happy to see the kids back in school; praying to god that we don’t have to shut schools again; children have suffered a lot- CM Kejriwal
Next article67,597 new cases of corona in India, a decline of 19 percent
Team Janmat Samachar

The most unilateral final of the World Cup played on this day, Pakistan got a tough defeat