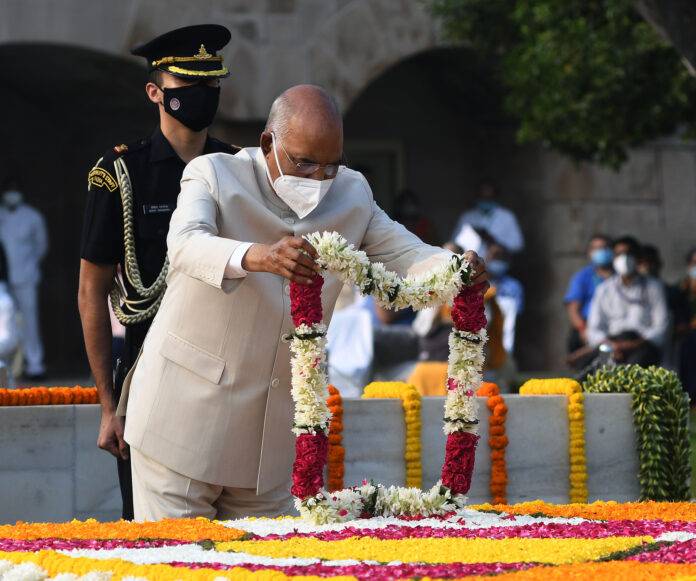 President Ram Nath Kovind greeted the countrymen on the eve of Gandhi Jayanti.

He said, “Gandhi Jayanti is a special day for all Indians. We should take a pledge to make India the country of Mahatma Gandhi’s dreams. On this occasion, we all have a chance to remember Gandhiji’s struggle and sacrifice. This opportunity inspires us to work for the prosperity and development of our country.”

On the birth anniversary of Mahatma Gandhi, Prime Minister Narendra Modi tweeted, “Humble tribute to the Father of the Nation Mahatma Gandhi on his birth anniversary. The life and ideals of revered Bapu will continue to inspire every generation of the country to walk on the path of duty. Gandhi Jayanti. But I bow to respected Bapu. His great principles are globally relevant and give strength to millions of people.”

At the same time, former Congress President Rahul Gandhi said, “Only one Satyagrahi is enough for victory.

A humble tribute to Mahatma Gandhi.”

Along with this, the country’s Defense Minister Rajnath Singh said, “I bow to revered Bapu on Gandhi Jayanti. A huge personality with tremendous willpower and immense knowledge provided exemplary leadership to India’s freedom movement. Let us celebrate his birth anniversary. Re-dedicate yourself to ‘Cleanliness and Self-reliant India’.”

At the same time, Union Minister Smriti Irani said, “Tributes to the great leader who united the country by leading the Indian freedom struggle, ‘Bapu’ Mahatma Gandhi, who showed the world the path of non-violence, on his birth anniversary. Revered Bapu’s life philosophy. And his thoughts are always an inspiration to all of us.”

Along with this, Uttar Pradesh CM Yogi Adityanath said on Gandhi Jayanti, “Heartfelt greetings to all the people of the state on International Non-Violence Day. Come, let us all make this day meaningful by taking a pledge to follow the principles of non-violence and the teachings and ideals of the Father of the Nation, Mahatma Gandhi. give.”

He wrote in another tweet, “Bapu’s life, giving the message of truth, non-violence and love, paves the way for the establishment of a harmonious society.”