BJP’s pressure on me to topple Maharashtra government: Sanjay Raut 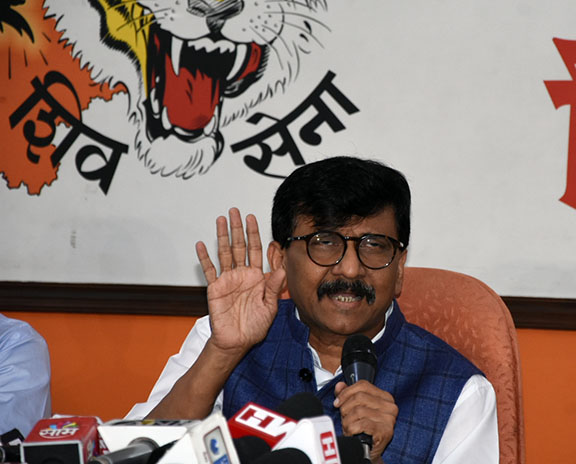 MUMBAI| In a sensational revelation, Shiv Sena MP Sanjay Raut on Monday claimed that for the past year, some senior leaders of the Bharatiya Janata Party have been forcing him to topple the Chief Minister Uddhav Thackeray-led Maha Vikas Aghadi (MVA) government. Raut said, “Some senior leaders are constantly trying to convince me not to support the MVA, because they have made all preparations to topple this government. They have given me the list of 22 NCP and Shiv Sena MLAs There are also cases on which criminal cases can be filed and they can be arrested. ”

However, he made it clear that all attempts by the BJP to use the CBI or ED or any other agency, send notices to topple the Shiv Sena-Nationalist Congress Party-Congress government or threat of arrest would fail. He said that the BJP cannot undo the hair of the government.

Raut declared, “This is a political war and we will only fight it politically.”

Raut was addressing a press conference after the notice was sent to his wife by the Enforcement Directorate (ED).

Raut’s wife Varsha Raut has been summoned by the ED on December 29 for questioning. But Sanjay Raut refused to get the notice.

Raut warned, “Don’t take ‘panga’ with me. I am the Shiv Bal Sainik of the late Balasaheb Thackeray. I will expose all of you. I have a list of scams of 120 BJP leaders. They are investigated by the ED for five years. And they all have to take refuge abroad like Nirav Modi and Vijay Mallya. ”

He said that only those who speak against the BJP or who were instrumental in forming the MVA government in Maharashtra, are being targeted by sending ED notices. And now this harassment has reached his family members.

He said, “This is a nomination. If someone indulges in such a nomination, the Shiv Sena will respond appropriately. We will not hide behind women like you. Chhatrapati Shivaji Maharaj has taught us that we will fight openly.”

He warned that “The day I open my mouth, it will become difficult for the BJP government at the Center”. He said that Shiv Sena is not afraid of a notice or 100 summons.

Another group of Shiv Sena activists put up a ‘BJP state office’ banner outside the ED office, which was later removed by the police.

Simultaneously, the district presidents of the party held a meeting at Sena Bhavan to discuss the situation arising out of ED’s summons to Varsha Raut.

Earlier, Shiv Sena-NCP-Congress leader came out in support of Sanjay Raut and attacked the BJP government at the Center.

Facebook
Twitter
Pinterest
WhatsApp
Previous articleFarmers’ next talks with the government on December 30
Next articleIf the government does not listen, we will sit here: Rakesh Tikait
Team Janmat Samachar