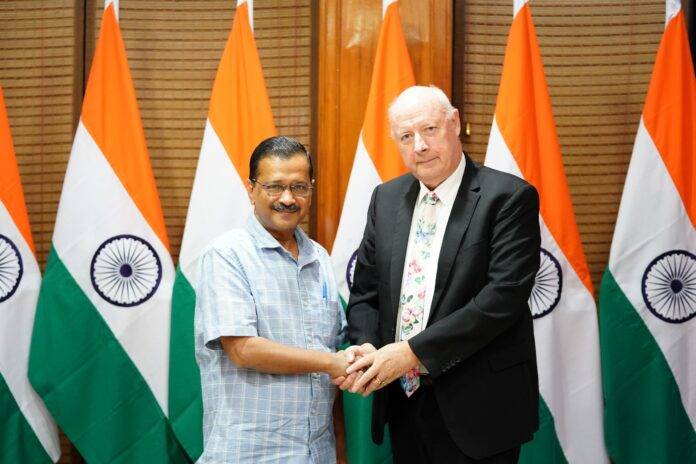 NEW DELHI: The Kejriwal government will work closely with Denmark to provide 24-hour tap water, clean air and world-class roads in Delhi. Today, Denmark’s Ambassador to India HE Shri Freddy Swain called upon Chief Minister Shri Arvind Kejriwal at the Delhi Secretariat. During this meeting, the two engaged in a thorough discussion about air pollution, groundwater recharge, and development of world-class road infrastructure. CM Shri Arvind Kejriwal asked the Danish Ambassador for a presentation on Denmark’s efforts on recharging groundwater and reducing air pollution, which the latter shall soon give. CM Shri Arvind Kejriwal stated, “We want Delhi’s roads to be world-class. We are redeveloping 500 kilometres of roads in Delhi as per European standards. We can collaborate with Denmark on the road beautification project if the need be.” Danish Ambassador HE Shri Freddy Swain praised the Kejriwal Government’s efforts in reducing Delhi’s air pollution. He was especially fond of the electric vehicle policy of the Delhi Government. He also appreciated the e-auto project of the Delhi Government and mentioned that he has had the pleasure of driving an e-auto, which he found to be both enjoyable and exciting. Deputy CM Shri Manish Sisodia was also present during the meeting.
HE Shri Freddy Swain, the Danish Ambassador to India, and Ms Anitha Kumari Sharma, the Embassy of Denmark’s Urban Development Counselor, called upon Chief Minister Shri Arvind Kejriwal at the Delhi Secretariat, today. The Danish Ambassador congratulated CM Shri Arvind Kejriwal on the formation of the Aam Aadmi Party government in Punjab after the formation of the Aam Aadmi Party government in Delhi. The two had a detailed discussion about air pollution, increasing ground water, and developing world-class road infrastructure, as well as how they could collaborate on these issues.
CM Shri Arvind Kejriwal said that we are also working on groundwater recharge and can do better work together with Denmark in this area. Chief Minister Shri Arvind Kejriwal said that there is a lot of potential in Delhi to use rain water for ground water recharge. With this we can meet our water requirement. CM Shri Arvind Kejriwal asked the Ambassador of Denmark for a detailed presentation on the good work done in Denmark regarding groundwater recharge, so that we can understand it and work together on it.
CM Shri Arvind Kejriwal said, “our government is working with a lot of seriousness to ensure that our citizens of Delhi get pure air. We are working on several initiatives to reduce air pollution. The results of our various initiatives are also visible. There has been a significant reduction in air pollution in Delhi. We are promoting electric vehicles in Delhi to control air pollution. For this we have also implemented an EV policy under which a subsidy is being given to the citizens of Delhi to encourage them towards EV.”
At the same time, Deputy Chief Minister Shri Manish Sisodia said that positive results are coming out of the EV policy. Now, out of the total number of new vehicles purchased in Delhi, more than 12 percent of electric vehicles are being registered.Shri Freddy Swain lauded the EV policy of the Kejriwal Government and said that great work is being done to promote electric vehicles in Delhi. He said that he has also used e-autos in Delhi. “This is a good initiative. This will reduce air pollution. I have also got the experience of driving an e-auto. It was quite exciting. This policy of the Delhi Government is very good and it will also help a lot in air pollution control.”
CM Shri Arvind Kejriwal said, “Our government is working hard to make Delhi’s roadways world-class. We are aiming to beautify Delhi’s 500-kilometre-long roads in the style of European countries. We have chosen a few routes in Delhi for a pilot project, and progress at these sites is in full swing. There appears to be ample room for improvement and suggestions in our initiative. Therefore, we are excited to collaborate with Denmark on road infrastructure. We wish to learn from the improvements Denmark has made to its road infrastructure and integrate those in our projects for better results.”
It is worth noting that, on the orders of Chief Minister Shri Arvind Kejriwal, about 500 kilometres of Delhi roads are being refurbished and improved at par with European standards. The pilot project is currently being implemented on 16 roadways in Delhi. On 31st May, CM Shri Arvind Kejriwal paid a visit to the road in Pitampura that has been beautified as part of the pilot project, which runs from Britannia Chowk to the Outer Ring Road. CM Shri Arvind Kejriwal gave several recommendations to the officials at the site to improve the horticulture along the roads. After the work is completed, all 16 pilot project roads under construction in Delhi will be assessed. After this, all the positive outcomes that emerge from the various projects will be applied to the rest of the road’s redevelopment.