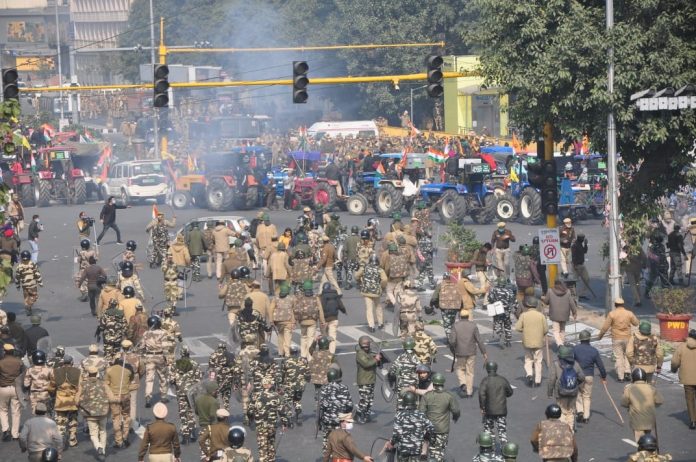 New Delhi | The leaders of the United Kisan Morcha have strongly condemned the incident of violence and violence in the Red Fort on Republic Day by the uncontrolled farmers, who are holding the movement against the agrarian reform of the Modi government, and today (Wednesday) in the front meeting This incident of violence will be discussed and further discussions will be held to keep the movement peaceful. The agitation of the Border Farmers of Delhi continues on the 63rd day on Wednesday demanding the repeal of three new Central Agricultural Laws and a legal guarantee for the purchase of all crops at the minimum support price (MSP). The leaders of the Samyukta Kisan Morcha, a consortium of peasant organizations leading the movement, have appealed to the farmers to continue demonstrating peacefully and condemned the incident of violence on Tuesday.
Dr. Darshanpal, president of the Revolutionary Farmers Union in Punjab and leader of the United Kisan Morcha, told IANS that the farmers’ movement is peaceful and the front has no connection with those carrying Lal Qila farmers and committing violence during the tractor rally.Dr. Darshan Pal said that the joint Kisan Morcha meeting will also discuss about the incident of Tuesday and the farmers will be appealed to keep the protest peaceful. Dr. Darshanpal said that on the question of any further talks with the government after the ban on the implementation of the three agricultural laws for a year and a half and requested to reconsider the government’s proposal to resolve the farmers’ issue by forming a committee The subject can also be discussed in Wednesday’s meeting. He said, we will call Deep Sidhu an anti-social element and the organization that goes with him, the Kisan Mazdoor Sangharsh Samiti is not included in our United Kisan Morcha. The leaders of the United Kisan Morcha have accused Punjabi actor Deep Sidhu of taking away the farmers to the Red Fort and creating a ruckus there.

The leaders of 32 farmers’ organizations of Punjab are going to discuss this whole development before the meeting of United Kisan Morcha at 2 pm. Prior to this meeting, Harinder Singh Lakhowal, general secretary of the Bharatiya Kisan Union (Lakhowal), a constituent of the Samyukta Kisan Morcha, told IANS that 32 farmers’ organizations in Punjab followed the pre-determined routes in the Kisan Republic Day parade. He said that the violence in the clash with the police or the hoisting of the flag on the Red Fort is tragic and he sharply criticizes it. Harinder Singh said that this incident has caused a lot of damage to the farmers’ movement and he urges the farmers involved in the movement not to deviate from their cause and keep the protest peaceful.

Joginder Singh, president of the Bharatiya Kisan Union (Ekta-Ugrahan), said that there was no program of the United Kisan Morcha to visit the Red Fort, so breaking the prescribed route and going to the Red Fort did not comply with the agreement with the police. Joginder Singh is also involved in the United Kisan Morcha. He condemns any kind of violence.

On the question asked about raising the flag on Lalkila and hoisting the flag, he said that it has gone terribly wrong. Joginder Singh also said that in the meeting of the Front, the outline of the movement so far and tomorrow’s event as well as the strategy will be discussed.

When the entire nation was celebrating the 72nd Republic Day on Tuesday, the Peasant Republic Parade, which came out of the borders of the National Capital Region, became uncontrollable and people riding on tractors reached the Red Fort and started making a ruckus there. The miscreants also created a ruckus at ITO where the police had to lathi-charge them.