Have Modi and Shah changed their perspective on Jammu and Kashmir, read the story of changing the Lieutenant Governor! 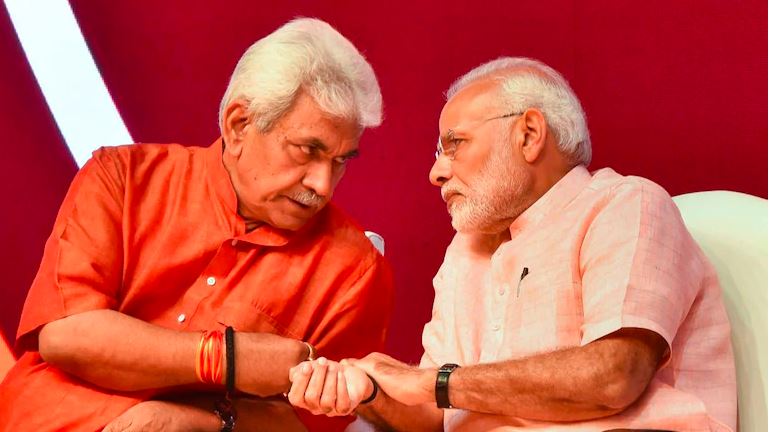 Girish Chandra Murmu, a 1985 batch IAS officer of Gujarat cadre, was given the responsibility of the first Lieutenant-Governor of the Union Territory of Jammu and Kashmir. After the abolition of Article 370, a number of restrictions were imposed on the general life of the people, most of which have now been lifted …

Manoj Sinha, Prime Minister Narendra Modi’s confidant and former Minister of State for Railways, has been appointed as the new Lieutenant Governor of Jammu and Kashmir. His appointment in political circles is being seen from a different perspective. Anand Kumar, a political expert, and former JNU professor has given a possibility behind this major change in Kashmir. He says that there has been some difference in the attitude of PM Modi and Union Home Minister Amit Shah regarding Kashmir.

Shah is still hospitalized due to Corona infection. When the exercise to remove Article 370 started in Kashmir last year, Modi’s advice was to wait a bit before taking any tough measures. Since Shah was adamant at that time, the government had to take that step. PM Modi’s intention behind appointing senior BJP politician Manoj Sinha as Lt. Governor is to find a new way of a political solution in Jammu and Kashmir.

The special thing is that former Minister of State for Railways Manoj Sinha has been given the responsibility of the new Lieutenant Governor of Jammu and Kashmir, exactly one year after the removal of Article 370. On August 5 last year, the Central Government announced the abolition of Article 370 from Jammu and Kashmir. Satyapal Malik was the governor there during that time. After getting the status of Union Territory, the post of Lieutenant Governor was created there.

Girish Chandra Murmu, a 1985 batch IAS officer of Gujarat cadre, was given the responsibility of the first Lieutenant-Governor of the Union Territory of Jammu and Kashmir. After the abolition of Article 370, a number of restrictions were imposed on the general life there, most of which have now been lifted. Things are improving daily.

PM will now look at Kashmir matter himself
According to Professor Anand Kumar, Prime Minister Narendra Modi has been concerned about the Kashmir issue in the past. He showed no haste regarding Article 370 in the first term of his government. Secondly, when he became PM, he started work on the strategy of removing Article 370 from Jammu and Kashmir.

Since Amit Shah was with the Union Home Ministry this time, he prepared the way to remove Article 370 from Kashmir without any delay. However, in this case, Shah also got the full support of PM Modi. Anand Kumar explains that now PM Modi wants a political solution to the Kashmir issue in his own way. For this, they have chosen Manoj Sinha.

From the very beginning, Sinha is counted among the special confidants of Modi. Due to this trust, he has now been given the command of Lieutenant Governor. There is confusion about jobs, especially in Jammu. A precise plan will have to be worked out to resettle the Kashmiri Pandits. Due to many issues not being clear, the fear of people will have to be removed. All these works will be included in Sinha’s main responsibilities.

These will be the challenges of the new Lt. Governor
Anand Kumar says that the new Lt. Governor will have to explain a lot to the people of Jammu and Kashmir in political language. Right now people understand that Muslim domination is over here. They want Kashmir to continue its existence. There is a fear in the minds of people that they will not be separated from the rest of India.

Many of the population of Jammu and Kashmir want to remain connected with the rest of India. That engagement may be in political, social, cultural, and economic spheres. Now the new Lt. Governor Manoj Sinha has to fulfill this responsibility. Since he is directly related to PM Modi, he will move forward from the beginning keeping in mind the purpose of a political solution.

Manoj Sinha’s appointment and a new message for BJP
The appointment of Modi’s trusted Manoj Sinha has given a new message to the BJP at the Center. Sinha, who was Minister of State for Railways and Minister of State for Communications in the first term of the Modi government, lost the Lok Sabha elections from Ghazipur seat last year. Earlier, after the 2017 assembly elections in UP, his name quickly rose as the Chief Ministerial candidate.

It is said that if a rebellion-like situation did not arise in the party on the last occasion, then he was Modi’s first choice for the post of Chief Minister of UP. Now there can be a tussle about the stature and status in the party. No one knows where and how the faces of Nitin Gadkari, Rajnath Singh, Amit Shah, and Yogi Adityanath will sit in 2024. Sinha’s appointment may have been a message for this manipulation.

Priyanka brought back memories of Indira in Kerala