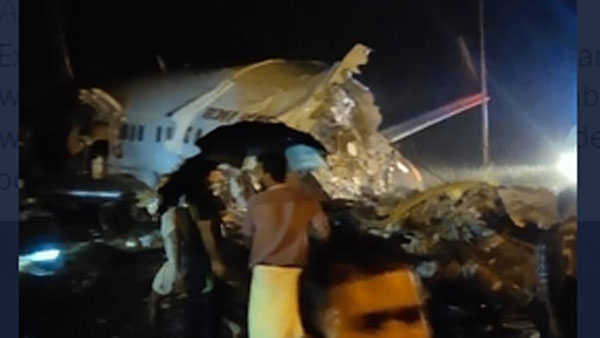 Kozhikode Crash News: Heavy rains in Kerala shortly after a landslide killed 15 people, a fatal plane crash occurred in Calicut. Both the pilot and the co-pilot were killed in the incident. With four deaths reported so far, the death toll is expected to rise further. There are suspicions that the accident may have been caused by the runway not being visible properly due to heavy rains. On the second attempt to land, the plane skidded and crashed into an adjacent valley.

Distressed to learn about the tragic accident of Air India Express aircraft in Kozhikode, Kerala.

Have instructed NDRF to reach the site at the earliest and assist with the rescue operations. pic.twitter.com/aAmegXyoii

Distressed to learn about the tragic accident of Air India Express aircraft in Kozhikode, Kerala.

Have instructed NDRF to reach the site at the earliest and assist with the rescue operations.

Amit Shah: The accident is unfortunate

Meanwhile, Union Home Minister Amit Shah expressed regret over the accident. Upon learning of the accident, Amit Shah immediately ordered NDRF personnel to rush to the spot. Meanwhile, an Air India flight from Dubai to Kozhikode as part of the Vandebharat mission skidded while landing at Kozhikode airport. The accident happened around 7:40pm on Friday night.

Fire broke out when the plane crashed

The airport is located on a hill. It is one of the three hilly airports in the country. The DGCA said the plane fell to a depth of 35 feet. Eyewitnesses said the fire broke out when the plane crashed. Two people were killed in the crash, local media reported. Information that the pilot was also involved. The deceased pilot was identified as Captain Deepak Sathe. However many passengers were seriously injured in the accident. An emergency control room was set up to find out about the plane crash. The DGCA also said that information can be obtained by calling 04832719493.

Captain Devi Sathe and Deepak Sathe were the Pilots

The co-pilot was killed in the Air India plane crash along with pilot Captain Devi Sathe. Captain Sathe has also previously served in the Indian Air Force. He is known as the senior most pilot in the country. A total of 191 people were on board the plane at the time of the accident. Of these, 174 were passengers, 10 were children and four were crew and two were pilots. As soon as the accident was reported, 24 ambulances rushed to the spot and rushed the injured to the hospital for treatment. Experts say pilots must be very careful when landing on the runway in Karipur. Because it is said to be an airport on a hill so be very careful.

New Delhi | The Election Commission of India (ECI) on Saturday extended the ban on rallies and roadshows with physical presence till January 22. The Election...
Read more
National

New Delhi | The CCPA-Cabinet Committee on Parliamentary Affairs has recommended the commencement of the Budget Session of Parliament from January 31. Sources gave this information on...
Read more