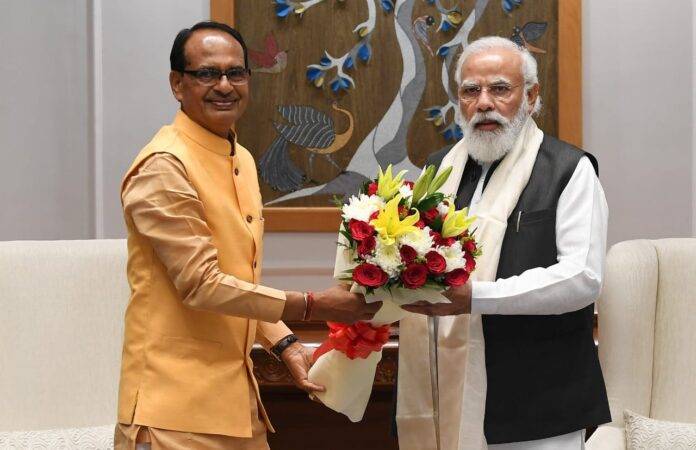 Informing the Prime Minister about the status of Covid in Madhya Pradesh, Shri Chouhan informed that Covid is under control in the state and there are only 127 active cases. Giving information about the Covid vaccination, Shri Chouhan said that 88 percent of people in the state have been given the first dose while 27 percent of people have been given the second dose of the vaccine.

Chief Minister Shri Chouhan apprised the Prime Minister about the CM Rise School scheme and informed that to provide quality education in the state, a total of 350 such schools are being opened on 25-30 km radius. These schools will be equipped with facilities like playgrounds, libraries and laboratories. There will be facility of commutation by buses for the students. Also, teachers will be selected from among the existing teachers on the basis of examination. Prime Minister Shri Modi praised this new education experiment of Madhya Pradesh.

Shri Chouhan informed that the year 2023 will be observed by the United Nations as the year of coarse cereals. As a preparatory for it Madhya Pradesh is encouraging self-help groups which are producing nutritious coarse grains like Kodo-Kutki. He also discussed how Madhya Pradesh should become a model state in which crops with high export potential should be promoted by striking a balance between surplus and deficit production of crops in the state. During the discussion on diversification of crops and adoption of commercial farming, Prime Minister Shri Modi suggested cultivation of sandalwood in the state, so that farmers can get more monetary benefits. While discussing about ethanol policy in the state, Chief Minister Shri Chouhan informed that 28 companies have applied for permission of ethanol production in the state in which surplus grain can be used for converting into ethanol. Apart from this, Chief Minister Shri Chouhan informed that currently double the revenue land is to be given for afforestation in case of forest land acquired for developmental works; he suggested that if provision for three times afforestation in degraded forests is instead adopted then the forest area will increase.

Shri Chouhan also discussed the measures taken to strengthen the good governance system in the state. He informed that Deen Dayal Committees have been constituted in Madhya Pradesh at the Panchayat level for effective implementation of schemes and they are monitoring the development schemes properly. The Chief Minister informed the Prime Minister that he is himself doing physical verification of the benefits received by the beneficiaries by interacting directly with the public during his Jan Darshan program. His efforts were greatly appreciated by the Prime Minister. Shri Chouhan also discussed the Karmayogi campaign for capacity building of state ministers and their staff. The Prime Minister suggested the implementation of voucher system in the state.

During the meeting, the Chief Minister invited the Prime Minister to participate in the Swamitva Scheme program in Harda district where 100% title deed will be issued. He also invited the Prime minster for the inauguration of state-of-the-art Bhopal railway station and Janjatiya Gaurav Divas event to be held on 15th November.

Various other developmental issues such as Ayushman Bharat Yojana, Digital Health Mission and Sickle Cell Anaemia Mission were also discussed during the meeting. Shri Chouhan also apprised the Prime Minister about the status of rainfall and fertilizer supply in the state.

Fire breaks out in Delhi’s AIIMS, no casualties