Home Politics PIL filed regarding Bhawanipur by-election, the question on the jurisdiction of Chief...
PoliticsTop Stories

PIL filed regarding Bhawanipur by-election, the question on the jurisdiction of Chief Secretary 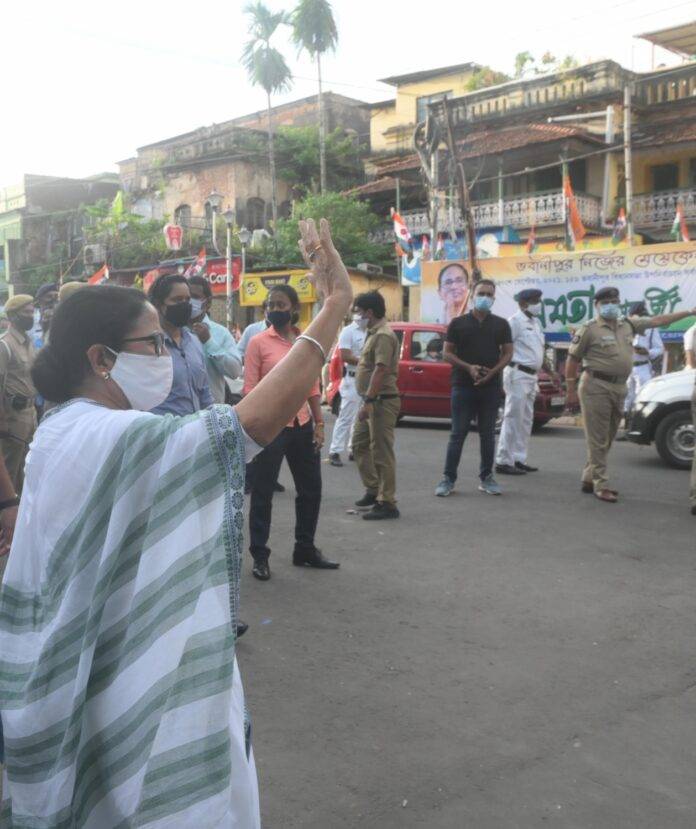 Kolkata| A Public Interest Litigation (PIL) has been filed in the Calcutta High Court questioning the jurisdiction of the Chief Secretary objecting to him requesting the Election Commission to hold by-elections to the Bhawanipur assembly constituency in Kolkata from where Mamata Banerjee intends to contest elections. The petition is likely to be heard by a bench of Acting Chief Justice of the High Court Rajesh Bindal on Monday.

Controversy arose over the announcement of the by-election in Bhawanipur after the Election Commission in its notification said that the by-election for the South Kolkata constituency was being treated as a special case due to the request of the state government.

The Election Commission has appointed Chief Secretary H.K. Quoting Dwivedi’s statement, he said, “He (Chief Secretary) quoted that under Article 164(4) of the Constitution, a minister who has not been a member of the State Legislature for a period of six consecutive months, the expiry of that period There will be a constitutional crisis and void in the post-Ministerial and top executive positions in the government until elections are

held. He also pointed out that in view of the administrative needs and public interest and to avoid a vacuum in the state, Kolkata would Bypolls can be held in K Bhawanipur, from where Chief Minister Mamata Banerjee wants to contest.

The notification said, “Taking into account the inputs and views of the Chief Secretaries and the respective Chief Electoral Officers of the States, the Commission has decided not to hold bye-elections to the other 31 Assembly Constituencies and 3 Parliamentary Constituencies and the Constitution of the State of West Bengal in view of the constitutional requirement.” On a special request, it has been decided to hold by-elections in Bhawanipur assembly constituency.”

Petitioner Sion Bandyopadhyay in his PIL opposed the notification and questioned the jurisdiction of the Chief Secretary.

The petitioner asked whether the bureaucratic head of the state has the right to request the Election Commission to hold elections in a particular constituency? Because the Chief Minister of the state ‘intends to contest elections’ from there.

It has also been alleged that Mamata Banerjee used Chief Secretary Dwivedi to hold by-elections on only one seat.

The PIL has also questioned the separation of a particular constituency and the holding of elections there.

The petitioner questioned that apart from Bhawanipur, there are other assembly constituencies like Gosaba, Khardah, Shantipur and Dinhata, where seats are lying vacant, then why Bhawanipur was considered an exception and if by-elections were not held in this South Kolkata constituency, what kind A constitutional crisis will arise.

State BJP president Dilip Ghosh had earlier threatened to move the court over the announcement of by-polls. He said, “What kind of constitutional crisis will arise if elections are not held in Bhawanipur? Is the chief secretary indicating that there could be a constitutional crisis if Mamata Banerjee is not the chief minister of the state? It is not their responsibility. The Election Commission is an autonomous body, which should not come under anyone’s influence.”

Meanwhile, Leader of Opposition in West Bengal Assembly Shubhendu Adhikari is in Delhi where he is likely to meet Union Home Minister Amit Shah. It is being speculated that the officials may discuss the issue of the Bhawanipur by-election with the Home Minister.

Facebook
Twitter
Pinterest
WhatsApp
Previous articleKejriwal Government to revive water bodies; give them a pleasant look
Next articleKejriwal Government to develop Delhi’s first Multi-Level Bus Parking at Hari Nagar and Vasant Vihar depot
Abid Ali
Sr. Content Editor & Social Media Manager at Janmat Samachar. Has Passion for writing about the Nation & the World and irrefutably telling about their issues to the masses.