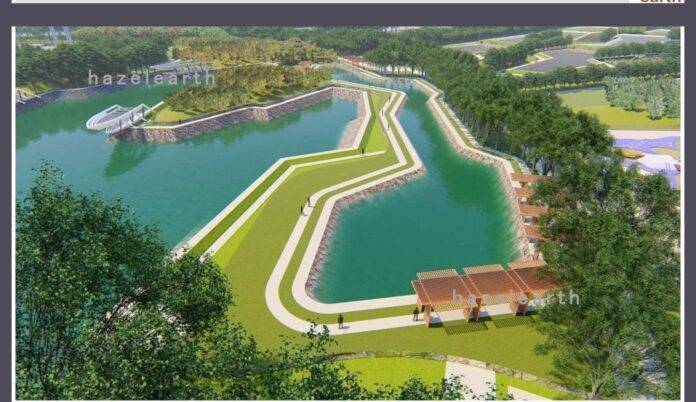 NEW DELHI: Water Minister and Chairman, DJB Shri Satyendar Jain chaired a review meeting of all the projects about water body and lake rejuvenation in Delhi on Thursday. The Water Minister reviewed each project individually and suggested different aspects which should mandatorily be part of the lakes rejuvenation project that the Delhi Government is carrying out. He said that the lakes of Delhi will be transformed into tourist spots. Delhi Government is using sustainable methods for lake revival and is working towards giving a pleasant look to its water bodies besides reviving them by using native plant species to rejuvenate the ecosystem. He further added that there should be no delays in the work due to improper inter-departmental coordination. Shri Satyendar Jain gave the deadline of 2 years to the officials to complete the revival and rejuvenation work of all the 22 lakes and 200 water bodies.

Shri Satyendar Jain instructed the officials to include the following major aspects in the execution of the project. He said, “The lakes should remain filled with clean water throughout the year. It should be ensured that maximum groundwater is recharged through these water bodies. Sludge and solid waste should be cleaned and the ecosystem should be rejuvenated. The lakes should be developed as public spaces with proper landscaping.”

Shri Satyendar Jain said, “The landscape of all the lakes including the rejuvenated ones should be worked upon. To achieve this, we will take the help of experts. The landscape of the lakes should be transformed in such a way that they become the centre of attraction for people and be on the maps of every tourist across the world.”

Delhi Jal Board (DJB) is working on 45 water bodies and is expected to complete its work by the end of this year. These were the most difficult water bodies to handle as they were receiving direct sewage from the nearby area. To tackle this, Decentralized Sewage Treatment Plants (D-STPs) are being deployed on the site-specific requirement.

In the rejuvenation of 22 lakes and green areas, the Delhi Jal Board (DJB) is using recycled water. This recycled water will be sourced either from new Sewage Treatment Plants (STPs) or existing STPs. To expedite the work, the Water Minister bifurcated responsibilities between two Engineering departments of the Delhi Government which will be involved in the whole rejuvenation work. Delhi Jal Board will ensure that lakes and water bodies receive water throughout the year in the form of recycled water from STPs while Irrigation and flood control department will work on the landscaping and creating public space.

“The rejuvenation of Timarpur Oxidation Lake and Rohini Lake are two of our important projects. These lakes should be transformed as per the expectations and the officials should work hard to make the plan come alive,” said Shri Satyendar Jain.

Shri Satyendar Jain also said that lakes are crucial buffers for absorbing high floods and conserving rainwater. In a separate meeting, he instructed Public Works Department (PWD) officials to connect stormwater drains under their jurisdiction to nearby water bodies and lakes. This will not only reduce the load from existing stormwater drains but will also reduce the accumulation of water at the lowest points in the event of flash rain.

He stressed upon conservation of lakes in the city and instructed officials that no delay should happen because of improper inter-departmental coordination. He instructed that such matters in which another department is not responding should be brought to his notice immediately so that issues can be timely resolved. Shri Satyendra Jain gave a deadline of 2 years to complete all the above works of revival and rejuvenation of 22 lakes and 200 water bodies