Home National Delhi The farmers have full support from Aam Aadmi Party, and we are...
NationalDelhi

The farmers have full support from Aam Aadmi Party, and we are available for their service at all times: Satyendar Jain 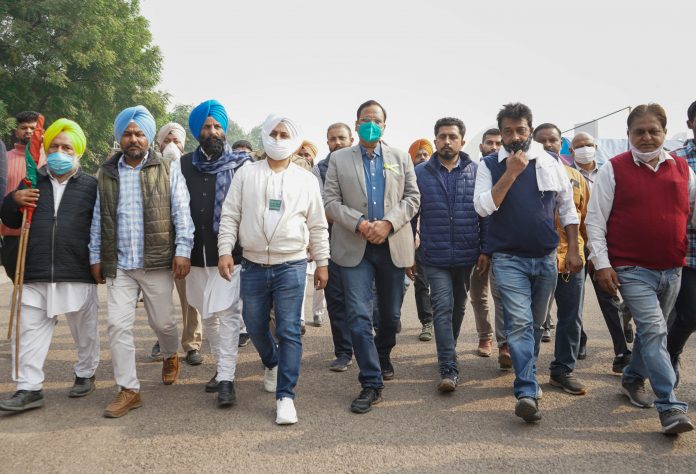 Minister of Health and Family Welfare, Shri. Satyendar Jain visited the Singhu border which is witnessing the ongoing farmer agitation in unanimity with our providers and to review the amenities made available for them by Delhi Government during their peaceful revolution. He said that health camps, ambulances, water supply are provided for the farmers. Instructions have been issued to make more arrangements for fire and waterproof tents.
Hon’ble Minister said that Captain Singh and BJP government are working in unison to harass the farmers. Captain Singh has been attending meetings with Shri Amit Shah but neither has he met with the farmers, nor is he being vocal about the decisions he’s making.
“We have set up a health camp, ambulances, 24-hour water supply. Delhi Government is providing full support to the farmers. I want to say that the farmers are the backbone of the nation and they have been forced to travel kilometers. They are being harassed by Captain Amrinder Singh and BJP, who have joined forces. If they wanted, a solution could have been devised for their demands.
Captian Singh came to Delhi, met with Amit Shah and went back. He did not come to meet with the farmers who are protesting in Delhi’s cold. Captian Singh staged an act to nullify the bills when in reality, he didn’t at all.
He had multiple opportunities to stand up against these bills, but he didn’t. They are politicizing the issue, and the welfare of the farmers is of no concern to them”
Commenting on the amenities made by Delhi Government, he said,
“We have provided for more than 300 toilets, 40 tankers of water, ambulances and health teams are available. The only problem we are facing is that toilets across the barricades are not seeing water supply since yesterday. I will appeal to the police to allow for providing water in those toilets. Instructions have been issued to make arrangements for adding fire and water tents”
Hon’ble Minister said, “the farmers are the backbone of our nation. If standing with the farmers is politics, then everyone should be involved in this revolution. Captain Singh should be vocal about the meetings he has been having with Shri. Amit Shah. The farmers are our providers, and I believe their voices should be heard and their demands should be met”