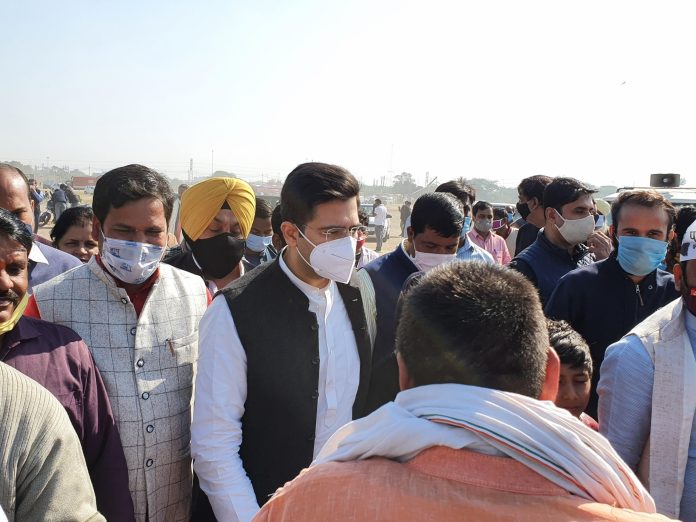 Farmers protesting against agricultural laws have camped at Tikri and Singhu border. However, farmers from Punjab who have come to Delhi have been allowed to perform at Nirankari ground in Burari and Aam Aadmi Party leader Raghav Chadda has come to take stock of the arrangements being made at Nirankari ground. AAP leader Raghav Chaddha said that “Modi government should not make it a battle of importance. Kejriwal government is welcoming farmers in Delhi.”

In Nirankari Maidan, the Aam Aadmi Party has got its banners installed in the morning. On this issue, Chaddha told, “If a person feels with his mind that it is a different subject, we are only hosting farmers.”

Tents, shelters, moving toilets are being provided to the farmers. “We have been instructed by Chief Minister Kejriwal to maintain all the arrangements in Nirankari Maidan. Wherever farmers want to go and picket, they should have complete independence. It should be given to the Prime Minister Narendra Modi’s government,” Chaddha said. One should not create a battle of them. ”

Basic essential facilities are being provided to the farmers on Nirankari Maidan. Under this, drinking water was first arranged for the farmers here. For this, the Delhi government has sent its MLA and Delhi Jal Board vice-president Raghav Chadha to Burari to take stock of the system, while Raghav Chaddha had reached Nirankari Maidan yesterday.

Since its launch earlier in the day, ‘Green Delhi’ App receives 228 complaints related to various departments