Priyanka brought back memories of Indira in Kerala 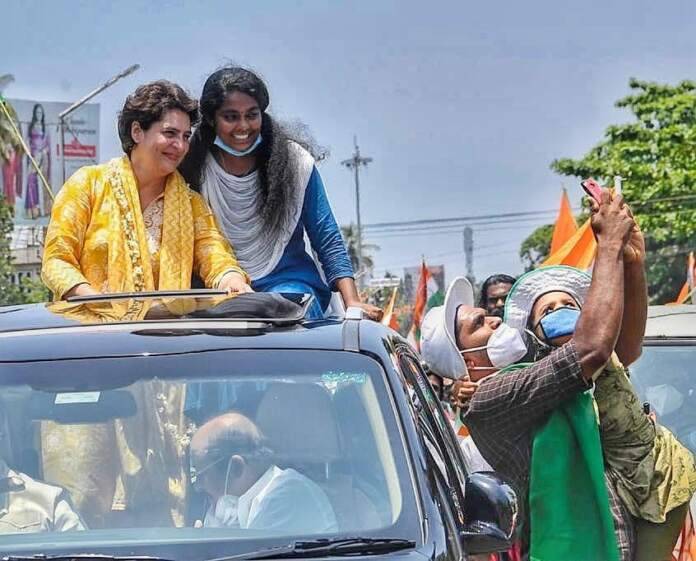 Thiruvananthapuram| The target of Priyanka Gandhi Vadra’s arrival to stop Pinarayi Vijayan from the second term in Kerala appeared to be working on Tuesday, as his roadshow in the state saw huge crowds. When he spoke at his first election rally, many people saw in him the shadow of his grandmother and former Prime Minister Indira Gandhi, who was dear to many in Kerala.

When Priyanka Gandhi was riding her SUV during the roadshow, people were getting excited. To get a glimpse of them, people were seen climbing on the roadside and from their homes to the roofs of buildings.

As he began his speech at Karunagapalli, about 100 km from here, he lashed out at Chief Minister Vijayan.

Priyanka said, “This is the place where the most educated people are and so everybody’s eyes are on the path you are going to vote on because it will set the way forward for our country.”

He said, “You have to speak because you are the greatest force and you are the real gold.”

Priyanka Gandhi said, “Over the last five years he has been following the principle of fear, favoritism and fraud. He has instilled a sense of fear and all the tall promises that have been made have all fallen flat, as promised. There was no such alternative model of development. ”

Rising fire against the Vijayan government, he said, “Every time something comes out. We hear the Chief Minister saying that he does not know anything.”

He said, “If so, who is running the government. In the EMCC deep-sea phishing scam and even WhatsApp messages related to his office came out but he says he does not know anything.”

The Congress leader said, “When the gold scam case came up and the sprinkler data scam came to light, it was still their reaction.”

Priyanka Gandhi is currently on an electoral tour with a hectic schedule and is striving for the party’s victory ahead of the April 6 assembly elections.

New Delhi| The Congress has constituted three committees, including the Political Affairs Group, Task Force 2024 and the 'Bharat Jodo Yatra', as part of the...
Read more
Entertainment